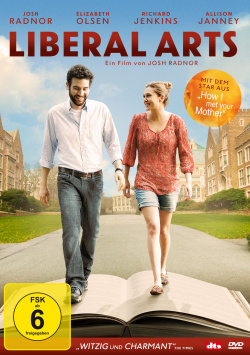 Contents: Jesse (Josh Radnor) is not really happy with his life at the moment. He was abandoned by his girlfriend and does his job at a New York college with little passion. He is all the more delighted when he receives an invitation from his former professor Peter Hoberg (Richard Jenkins) to return to his old university for the celebrations marking his retirement. Here the mid-thirties are reminded of a time in his life in which he really felt comfortable. And the emergence of these old feelings of happiness is further intensified by the encounter with 19-year-old Libby (Elizabeth Olsen), to whom Jesse currently has a good connection. A tingling relationship quickly develops between the two, which is maintained even after Jesse's return to New York in the form of a deep pen friendship. When Libby Jesse writes how much she misses him and that he should visit her, he has to decide whether this friendship can become a love that can have a future despite the age difference...

"Liberal Arts" is the second directorial work of "How I met your Mother"-Star Josh Radnor. As in his debut "Happythankyoumoreplease", Radnor again relies on much quieter humour than one is used to from his successful sitcom. Similar to Zach Braff, who wanted to create a more demanding counterbalance to his role in "Scrubs" with his directing works "Garden State" and "Der letzte Kuss", Radnor also tries to break away from his present role of Ted with his movies. Jesse isn't fundamentally different in character from Ted. On the contrary, the two figures have a lot in common. But the approach to the character and the environment in which she is embedded differs from "How I met your Mother" enough to allow Radnor to show other facets of his skill here.

To support him are the wonderful Richard Jenkins, a very charming Elizabeth Olsen and a surprisingly crazy sympathetic Zac Efron. They all make for the film's very engaging feel-good atmosphere, which makes it understandable why Jesse feels so comfortable at his old university campus and why he believes to realize that his life in New York doesn't make him happy. Here the film also gets a slightly melancholic undertone, as Jesse is prevented from seeking his true happiness for the future by an idealized past in which he would like to live on - something he has in common with his old professor.

This makes "Liberal Arts" more of a coming-of-age drama than a love story. It is more about seeing the past as such and not wanting to cling to it convulsively. Jesse is determined to remain the young, idealistic and unadapted student he was at his university, not the grown man who has to take responsibility for his job and relationship in New York. He lives in a dream world and does not notice that he passes by his great happiness every day. The situation with Professor Hoberg is similar. He has the chance to bring a breath of fresh air into his life through his retirement, to experience something new and exciting. But he, too, is afraid of change and wants to hold on to his past as long as possible.

The friendship with Libby that Jesse builds up and that could soon become more plays a minor role, as does the encounter with a somewhat disturbed student who reminds Jesse of his younger self and whom he wants to free from his youthful world-weariness. All of this is very charming and entertainingly constructed, but the movie still lacks the last kick to be more than just nice entertainment with a pleasant flair. As a director Radnor just has to work a little bit on his narrative speed, so that he doesn't get lost too much in moments that easily get a certain insignificance. This already happened to him a few times in "Happythankyoumoreplease" and also in "Liberal Arts" some scenes can be spotted that could have taken a bit more tempo. Nevertheless: anyone who appreciates American independent comedies of the quieter, charming kind will easily overlook such small weaknesses. And then the following applies: Worth seeing!

Picture + sound: The picture on the DVD is particularly pleasing with its warm, ingratiating colours. The image sharpness is at a good level, whereby there is still some room for improvement, especially in the dark scenes. The sound is rather unspectacular, which isn't unusual for a movie of this genre. The dialogues and the soundtrack are the focus of the tonal events, but at least there are some minor ambient noises that make sure that there is also some life to be felt in the surround channels. Good!

Extras: As a bonus the DVD has a very enthusiastic and interesting audio commentary by Josh Radnor and producer Jesse Hara. In addition, there are almost 15 minutes of edited scenes in which, in addition to the alternative beginning, which shows Jesse being abandoned by his girlfriend, there is also a completely distant side story line about Jesse's buddy Miles (Michael Weston) and his dream of Spain and Spanish women. A 2-minute promo, which is a trailer enriched with small interview sequences, as well as the trailer itself conclude the additional offer.

Conclusion: "Liberal Arts" is a nice romantic comedy, in which Josh Radnor proves, as already with "Happythankyoumoreplease" as director, scriptwriter and leading actor, that he can do much more than just telling his children about how he met their mother. Even though the romantic comedy has some little pitfalls, Radnor is still a very charming movie, that hits the viewer's heart with rather quiet sounds and sympathetic characters. Those who like small American independent comedies like Zach Braff's "Garden State" can take a look here. Recommended