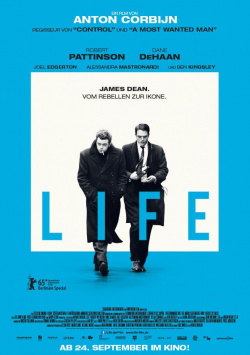 Young photographer Dennis Stock (Robert Pattinson) is tired of shooting only glamorous promo shots of big Hollywood productions. He finally wants to capture something special, something real. This runs into him in the form of the still completely unknown actor James Dean (Dane DeHaan). Allegedly, the unadjusted rebel is about to make his big breakthrough in the dream factory. He is still an outsider - and that is precisely why Dennis feels extremely attached to him. With great persuasiveness, he manages to persuade LIFE Magazine to make a photo series about Dean, with which he would like to recommend himself for more demanding assignments. But the work with the young actor proves to be extremely complicated. During a joint trip to Indiana to Dean's family, the tension between the men grows more and more and threatens to escalate. But instead it culminates in something very special...

Anton Corbijn, himself a celebrated photographer, sets a monument to two legends with his fourth feature film "Life": the actor James Dean and the photographer Dennis Stock, who took one of the most famous pictures of an entire generation with the actor's picture in Times Square, with which he captured the myth James Dean perfectly. As in his previous movies, Corbijn approaches the story very cautiously again. In many moments - and this is especially appropriate for this film - he simply lets the images speak and reduces the dialogues to a minimum. Those who don't like slowness and tranquillity in the cinema are really put to a tough test of patience in some scenes.

The most fascinating aspect of "Life", however, is undoubtedly the cast. Robert "Twilight" Pattinson, despite some respectable attempts, isn't necessarily known for being able to deliver great acting movies. And Dane DeHaan may be a good actor. But he has very little in common with James Dean on the outside. But it doesn't take long until both actors have cleared all doubts out of the way. Pattinson delivers an absolutely convincing performance as a photographer stuck in a professional and private crisis of meaning. And Dane DeHaan succeeds in becoming James Dean through his facial expressions, his movements and - at least in the English original version - his voice as well. Between the two there is also an electrifying tension, which makes the film extremely stirring, even in its many worn moments.

Corbijn spices up the story again and again with fine, subtle humour, which consists in particular of side blows to Hollywood. This satirical look behind the scenes of the dream factory also makes the film interesting for those viewers who are generally interested in this era of American cinema and not only in James Dean. But first and foremost, Anton Corbijn drew the gripping portrait of two outsiders in an industry that was only geared towards appearances, both of whom wanted to achieve more with their work (and ultimately managed to do so) than they should be allowed to. Not a film for a wide audience, but anyone who likes American arthouse cinema and appreciates the visual language of Corbijn will get his money's worth here. Worth seeing!