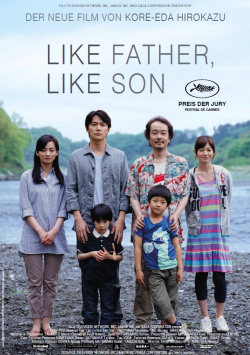 Ryota Nonomiya (Masaharu Fukuyama) is actually convinced that he can lead the perfect life. He is a successful architect and lives with his wife Midori (Machiko Ono) and their son Keita (Keita Ninomiya) in a nice apartment in Tokyo. But family happiness is suddenly destroyed when Ryota and Midori learn that the boy they thought was their child for six years is not their biological son, as two babies were swapped in the hospital where Keita was born. Her real son Ryusei (Shogen Hwang) lives in very simple circumstances with the grocer Yudai Saiki (Lily Franky), his wife Yukari (Yoko Maki) and their children. For both parents, the difficult question now is what counts more: blood ties or the six years they spent with the kids. Is it the best decision for the boys to tear them out of their familiar environment? And what decision can you as parents most likely live with?

"Like Father, Like Son" is not the first film to deal with the topic of swapped children. But not only its sober and therefore very realistic staging makes this drama an especially intense experience. Director Hirokazu Kore-eda's decision to portray the events almost entirely from the point of view of a father like Ryota also lends the story a special touch. Ryota has built the perfect life for himself and he's not willing to give it up. His reaction to the realization that Keita could not be his son is therefore not really emotional at first, but rather rational. He invested in the boy's upbringing and he wants this investment to pay off now. That's why he would be willing to simply accept both boys as his children - which, in view of the fact that Yudai Saiki can hardly offer his family anything anyway, would actually be the best thing for the children.

But little by little he has to realize that you can't measure your love for a child by how well it plays the piano or how good its table manners are. Hirokazu Kore-eda implements the emotional level that comes within reach here without any excessive kitsch or overblown drama. This makes the story look extremely realistic, which almost automatically forces the viewer to identify with the characters and ask the question: "What would I do"? And as soon as you ask yourself this question, you become aware of all the drama of this story - because winners simply can't be found here.

"Like Father, Like Son" deals with a very difficult topic, but is - apart from its carried tempo - no heavy food. Hirokazu Kore-eda has staged the story in a very accessible way, so that it has become absolutely worth seeing not only for lovers of Asian arthouse food, but also for all those who are interested in sophisticated dramas. A little program cinema pearl that makes you think and probably doesn't leave anyone cold.