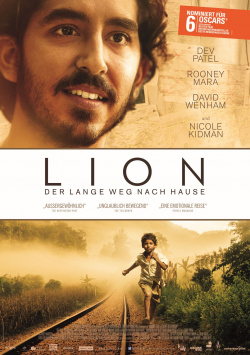 Actually, five-year-old Saroo (Sunny Pawar) just wanted to help his older brother Guddu (Abishek Bharate) earn a little money for her family. But when Guddu leaves the little boy for a few hours at a train station in a small Indian town and Saroo falls asleep in a stopping train, his whole life changes in one fell swoop. After a traumatic train ride lasting several days, he suddenly finds himself at the other end of the continent in Calcutta. In the hectic big city, the boy is absolutely lost, knows no one and does not understand the language. Finally he ends up in an orphanage and is adopted by the Australian couple Sue (Nicole Kidman) and John Brierly (David Wenham). The two of them take loving care of Saroo and make it possible for him to have a very beautiful childhood. But even as a grown man, Saroo (Dev Patel) feels that a part of his identity is missing. With the help of his girlfriend Lucy (Rooney Mara), he starts looking for his actual family - but he might as well be looking for a needle in a haystack…

"Lion" tells the true story of Saroo Brierly, who lost his family when he was a little boy and searched his way back home many years later. In his first feature film, director Garth Davis recounts the events in a very moving way, without ever drifting into kitsch, which could easily have happened towards the end. Even though the second half of the film, in which the search for the adult Saroo is the center of attention, it is the traumatic odyssey of the little boy that leaves a special impression. Sunny Pawar plays so heartbreakingly well that you almost always have tears in your eyes. When Saroo desperately calls for his brother, it really puts a stab in your heart every time.

The scenes in Calcutta are staged in an oppressively realistic way, which also makes the first half of the film so emotionally stirring. In the second part this changes a little. There are even some small lengths, which are more than forgivable just because of the good acting. The conflict between Saroo and his adoptive brother seems a little too constructed. Nevertheless, he also leaves a certain impression, as he gets a really strong performance out of Nicole Kidman, who is a bit pale at the beginning.

"Lion" is another example of life sometimes writing the best stories. Garth Davis has staged a very moving and in his own way also exciting film, in which hardly a spectator with dry eyes will leave the cinema. A great work for which there is only one possible conclusion: Absolutely worth seeing!