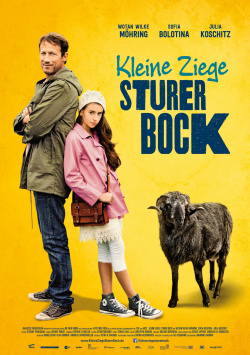 As a second-rate Elvis imitator Jakob (Wotan Wilke Möhring) can please the residents of old people's homes and end up with their young nurses, but he doesn't get rich from it. In order not to have to move back in with his parents at the age of 30, he is forced to accept unusual jobs. This also includes the transport of a ram to Norway. But just when he wants to start the journey, he learns that he is the father of a 12-year-old girl and that his daughter Mai (Sofia Bolotina) wants to get to know her producer. And so Jakob is forced to take the girl with him on the journey to Norway. Conflicts are inevitable. The sheep spreads a not exactly pleasant smell in the rickety box wagon, Mai lets the spoiled goat hang out opposite her father and Jakob is completely overwhelmed with his new role. The journey threatens to end in chaos before it has really begun. But the way still holds some surprises for the unusual trio…

At first glance, the summary of "Kleine Ziege, Sturer Bock" sounds as if Til Schweiger had written a new film for himself and one of his daughters. Dramaturgically, the similarities to Schweiger comedies like "Kokowääh" cannot be denied. But in all other aspects this beautiful father-daughter story is clearly superior to the Schweiger blockbusters. This is not gonna be Til Schweiger Bashing. After all, his films make many people happy and that's something that counts despite all the justified criticism. Nevertheless: the actually beautiful stories are too often completely watered down by intrusive songs, flat gags and exaggerated acting of the actors. And "Kleine Ziege, Sturer Bock" shows that it's also good in other respects.

Zuggeben, Uli Aselmann, who has taken over the overall direction of the film, and Johannes Fabrick ("Der letzte schöne Tag"), who is responsible for the production, don't do without the usual clichés. Some of the dialogues are very thick, while one or the other gag is too thin. Nevertheless, they show a reluctance in the realization of the nice story, which other German comedies too often lack. So the actors' play, especially the convincing new discovery Sofia Bolotina, seems pleasantly natural. And when it gets a little more silly, it's not served with a wooden hammer, which makes these gags work well.

The whole thing is embedded in beautiful landscape shots, which give the production a certain cinematic flair. It may be that "Kleine Ziege, Sturer Bock" does not revolutionize the genre of German family comedy. But the film doesn't only have a lot of heart, it also convinces with a sensitive staging and good actors. And for that there is a very clear one: worth seeing!