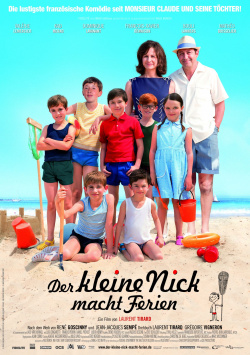 Finally summer holidays! Actually a reason to be happy, but little Nick (Mathéo Boisselier) is prepared for the fact that the usual quarrels between his parents (Kad Merad, Valérie Lemercier) will start now, whether they go to the beach or into the mountains. The boy is all the more surprised when this year the unanimous decision is made to go on holiday by the sea. But the family idyll is deceptive, because as a condition his mother demands that grandma (Dominique Lavanant), who wants to have kisses all the time, may come along. And as if that wasn't bad enough already, Nick is supposed to share a room with the loudly snoring old lady. Fortunately it does not take long until he has found new friends in the small seaside resort who make this holiday bearable. But then Isabelle enters his life. A catastrophe for Nick, because she seems to be the perfect future bride for Nick's parents. But he has long since lost his heart to his classmate Marie-Hedwig. And besides, he finds Isabelle extremely scary. With his new friends, Nick now has to make a plan to prevent the threatening forced marriage. But then the holiday takes an unexpected turn…

2009 Laurent Tirard created the real film version of the popular children's book series "Der kleine Nick" by René Goscinny and the illustrations by Jean-Jaques Sempé, a surprisingly charming and witty family comedy, which scored particularly well for its warm humour and lovable child actors. For the sequel "Der kleine Nick macht Ferien" they had to be replaced, because after five years they simply got too old. But Tirard and his team have also proved a good hand in the choice of the new Nick and his holiday friends. There are missing such wonderful figures as nerd Adalbert and the somewhat simple Clovis. But also Nick's new clique with its very special peculiarities makes for really good laughs again and again.

All in all the humor seems a bit more slapstick-like and also a bit flatter in the first half than in the first movie. But once Nick and his parents have arrived in the small tourist town at the seaside, there are also some really funny and original moments that comfort you over the somewhat bumpy beginning. Especially wonderful is Erja Malatier as Isabelle, who at the beginning turns the horror kids from "The Shining" into serious competitors and shortly afterwards proves what power the female sex has over boys in love. The whole thing culminates in a gag that is re-recorded in the credits and becomes extremely funny just because of this variation.

Although not every gag sits and the level of the first part isn't quite reached, "Der kleine Nick macht Ferien" is a really funny and beautiful children's movie, which you can still have a lot of fun with as an adult thanks to some quite subversive jokes. If you liked the books or the first film, if you like chaotic family comedies in general and if you still want to feel the summer holiday feeling, you shouldn't miss this crazy holiday by the sea. Worth seeing