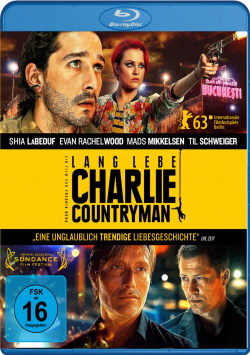 Content: When his mother dies, her son Charlie Countryman (Shia LaBeouf) makes a promise that a short time later he will fly to Romania. But already on the way to Bucharest it becomes clear that this will not be a fun holiday. Because in the middle of the flight his seat neighbor dies, not without asking Charlie still to deliver a message to his daughter Gabi (Evan Rachel Wood). But after he has complied with this request, the turbulences only really begin. Because not only does he quickly lose his heart to Gabi. He also has to deal with her psychopathic ex Nigel (Mads Mikkelsen) and the ice-cold Darko (Til Schweiger). And Charlie's crazy youth hostel roommates Karl (Rupert Grint) and Luc (James Buckley) also make sure that things don't get boring for him in Bucharest - and soon he even has to fear for his life...

"Long live Charlie Countryman" is a very unusual movie. Fredrik Bond, who has made a name for himself as a music video director for Moby, among others, stages the fast-paced love story as a fast-cut picture frenzy and as a stylish trip with very surreal moments. The journey through Bucharest by Charlie Countryman, who is always accompanied by death, is one of those movies that you don't just watch, but experience. The staging is too intense for the movie to be just a sprinkler. Surely the whole thing is very special and should therefore elude the broad mass taste. But if you like it a bit weirder, more unusual and more challenging, you will definitely get your money's worth here.

Besides the very successful visual realization, which is intensified by the driving soundtrack of Moby and other artists, the film also offers good-humoured, wonderfully exaggerated actor performances. While Shia LaBeouf is acting almost straight-lined, his colleagues Mads Mikkelsen, "Harry Potter" buddy Rupert Grint and Til Schweiger are going for over-twisted and really worth seeing fun performances, which increase the entertainment value of this "most romantic death trip of the year" considerably. But the main reason why the movie works so well is the fact that it has a really nice story to tell besides the stylish look, the harmonious soundtrack and the good cast.

Because even though it's rough and dirty at times, "Long live Charlie Countryman" is at its core a very tender romance and a big song of praise for life and love. Beyond any form of kitsch and common clichés, Bond manages very well to make the love between Charlie and Gabi seem real and very stirring. The fact that the emotions are not completely buried by the shrill look speaks for the director's talent. If you have a penchant for visually intoxicating, almost slightly experimental young independent cinema, you shouldn't miss a trip through Bucharest with Charlie Countryman. Worth seeing!

Picture + sound: The Blu-ray shows off the picture noise very well. Bright, powerful colours, good image sharpness, which sometimes blurs a little as a deliberately used stylistic device, and coherent contrasts make the film a visual pleasure even in home cinema. The powerful DTS-HD MA 5.1 Mix has powerful basses that are used for the soundtrack and some very well realized surround moments. All in all, the events sound very lively, whereby the dialogues are mixed very centrally. Good!

Extras: As a bonus the DVD only has the trailer for the movie to offer.

Fazit: "Long live Charlie Countryman" is a very unusual movie. Director Frederick Bond tells a quite bizarre love story in a real picture rush, which exerts an almost hypnotic fascination on the viewer. Sometimes completely weird and funny, then again moving and almost a little sad, but always somehow different - that's how this festival darling presents itself, who can be warmly recommended to friends of the slightly experimental entertainment cinema. The Blu-ray puts the film's striking visual language into practice very well, only in terms of bonus material the disc disappoints. Nevertheless there is a deserved one at the end: Recommendable!