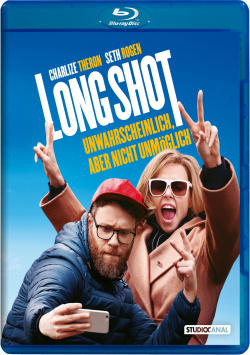 Film: When she learns that the incumbent US president (Bob Odenkirk) no longer wants to run for re-election to attack his career as a film star, the respected Secretary of State Charlotte Field (Charlize Theron) sees her chance: She wants to be the first woman in the White House. The politician is popular and appreciated in her own right, but her speeches are not her greatest strength. So Charlotte desperately needs a new speechwriter. When she meets the slightly chaotic journalist Fred Flarsky (Seth Rogen) at an event, whose babysitter she once was, she hires him for her campaign. Although the two couldn't be more different, the two are getting closer and closer. But it can turn out well, if a nerd falls in love with the future US president?

"Long Shot - Unlikely, but not impossible" is a really successful romantic comedy. Admittedly, some scenes are unnecessarily rough, which seems to belong to this genre nowadays. However, even though director Jonathan Levine is digging into the lower humor drawer every now and then, he always manages to counteract this with a lot of charm and clever dialogue wit. The film skilfully avoids every kitsch cliff and looks pleasantly fresh. Surely, the whole thing remains quite predictable until the end. But the way to the unavoidable happy end eludes the usual genre clichés and works just because of it really well.

Now, of course, there will be some people who will say: That a woman like Charlize Theron falls in love with a guy like Seth Rogen is completely unrealistic. This may be the case at first glance - if you only hang yourself on externalities. However, the script establishes very well why Charlotte feels attracted to Fred, which is also credibly transported to the screen by the good chemistry between Theron and Rogen. According to the German subtitle, this relationship is unlikely, but not impossible. And what's more: it's a feature film, a modern fairy tale - you can dream a little too.

Besides the romantic aspects, the film also doesn't save on satirical side blows to US politics. Bob Odenkirk ("Better call Saul") shines here as a completely incompetent US president who has his roots in show business and would much rather return to it after a term in office. Similarities to actually existing persons are of course purely coincidental. But it's not just the president getting his fat off. Other politicians and the media are also being pulled through the cocoa in what is often a subtle way. Even if this doesn't always work out, the entertainment value of this charming Romantic Comedy is consistently on a very high level, even if it's over two hours and a little too long. Who likes it romantic, but also likes it a little bit coarser, can really be recommended "Long Shot - Unlikely, but not impossible". Absolutely worth seeing!

image + sound: The absolutely clean image of the Blu-ray pleases with a high overall sharpness, which can also convince in the detail display and in darker scenes. The colouring is powerful and the contrast adjustment also leaves a very positive impression. The sound is available in a decent 5.1 DTS-HD MA mix. This remains largely unspectacular, but in a few scenes the full potential can be exploited. Here the sound mix convinces with clearly mixed dialogues and powerful surround effects. Good!

Extras: For a romantic comedy the Blu-ray has an amazing amount of extras on board. We start with a half-hour making of. This already offers a pretty good insight into the making of the movie. But there are also numerous other features that go even deeper. Beside an amusing interview with Seth Rogen and Charlize Theron (ca. 6:54 min.), which lives like the film from the good chemistry between the two, there is also a look at the stunts (ca. 6:11 min.), about the wonderful weird game of Alexander Skarsgaring;rd (ca. 4:54 min.) and about the guest appearance of the band BoyzIIMen (ca. 5:48 min.). Further impressions of the shooting (approx. 4:12 min.), a feature about the end of the film (approx. 7:24 min.), as well as a short documentary about love & politics (approx. 5:41 min.) and a commercial promo video (approx. 7:27 min.) complete the bonus package.

Fazit: "Long Shot - Unlikely, but not impossible" is an entertaining romantic comedy with a slightly satirical touch, which lives especially from the good chemistry between Charlize Theron and Seth Rogen. Charming, a bit rough, but also really romantic - and damn funny! The Blu-ray presents the film in good picture and sound quality and also offers a lot of bonus material. Clearly there's one for that: Absolutely recommended!