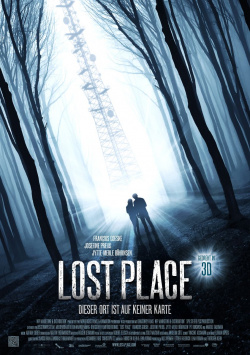 It was supposed to be just an exciting geocache trip, with Daniel (François Goeske) and Elli (Jytte-Merle Böhrnsen) in a chat room. Together with Daniel's buddy Thomas (Pit Bukowski) and Ellis's unenthusiastic girlfriend Jessi (Josefine Preuß) they set off for the deserted grounds of an American military base in the middle of the Palatinate Forest. Near a ghostly empty campsite you will actually find the geocache box you are looking for, but only a few hash biscuits are lying in it. Against all reason first Thomas and Elli, then also Daniel, attack the biscuits. But a simple drug intoxication cannot explain what happens to them: Jessi has a strange seizure and a mysterious stranger in a radiation suit appears, telling the teenagers about secret experiments from the 1980s in which radio technology was used to influence the human brain. What sounds like a wild conspiracy theory soon turns into a hopeless fight for survival for the four of them…

With "Lost Place" director Thorsten Klein ventures into a German mystery thriller with a slight horror impact. It is always absolutely praiseworthy when German filmmakers try their hand at works that do not belong to the genres preferred here (family drama, romantic comedy, coming to terms with the past). Especially the genre of the fantastic movie, to which horror and mystery can certainly be counted, is very neglected in Germany. So Klein is already highly praised for trying his hand at this subject.

With an old military installation in the middle of the Palatinate Forest, a great location was found that is unusual and extremely atmospheric. Thanks to the very good camerawork and a harmonious set, the film succeeds in creating a captivating and tense atmosphere, from which the story can profit, especially at the beginning. Although the story is based on true events and various interesting conspiracy theories, its overall structure is very conventional and doesn't offer much that is really new. Particularly with regard to the drawing of figures, the makers repeatedly make use of much too well-trodden clichés. Say-beater Thomas is obviously supposed to loosen up the whole thing a little humorously, but unfortunately he is no more than a stifler for the poor. And also Jessi, played by a criminally underchallenged Josefine Preuß, is a very stenciled drawn bitch, who really doesn't show any interesting facet.

Thereby it is hard for the viewer to be interested in the fate of the four young geocachers. The fact that they always act extremely stupid following the rules of the genre doesn't really make things any easier. But all this would have to be overcome, if the story would be thrilling and exciting until the end. But unfortunately this is not the case. After a successful start, the action becomes more and more confused and absurd from minute to minute. After the logic has been completely abandoned at the latest after half of its term, history also loses its clearly recognizable structure. Certainly, mystery films should generally have something mysterious, inexplicable about them. But a little more sense and dramaturgical coherence would certainly have been an advantage.

The decision to shoot the film in 3D doesn't really prove to be an advantage either. Also here the whole thing works quite well at the beginning, but at the latest when it goes into the interior of the mysterious facility, it becomes clear once again that 3D is simply not made for dark scenes.

As good as the intentions of the makers may have been, the actors are also very hard and as great as the spooky atmosphere of the facility in the Palatinate Forest may be, so "Lost Place" at the best will can not be described as really successful. Too obvious are the weaknesses that bury many of the good aspects under themselves. There are much worse genres - not only from Germany, but also from the USA or England. But there are also many much better ones, for which one should save the entrance fee better. For an entertaining home cinema evening quite okay, for an even more expensive visit to the cinema due to 3D, the viewers are simply offered too little really worth seeing!