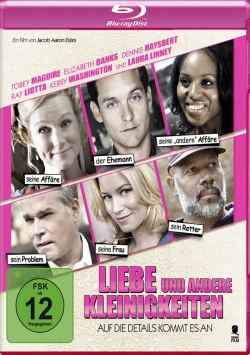 Love and other little things - Blu-ray

Content: The young gynecologist Jeff Lang (Tobey Maguire) just wants to make everything perfect for his little family. After he and his wife Nealy (Elizabeth Banks) decide that they still want a second child, he plans an extension to his own home. But when the building authorities deny him permission and he also has to fight a worm plague in the garden, which night after night attracts a raccoon, Jeff decides not to play by the rules and to simply carry out the expansion illegally. In order to prevent his somewhat crazy neighbour Lila (Laura Linney) from denigrating him to the authorities, he tries to be especially good with her. He doesn't suspect that this would set off a chain reaction of events that could destroy both his family happiness and his professional career...

"Love and other trifles" is the latest feature film by Jacob Aaron Estes, who became an absolute festival favourite ten years ago with his outstanding drama "Mean Creek". In his second feature film, which was shot in 2009 and is only now finding its way into our home cinemas, the filmmaker is much more humorous than his melancholy first film. For his suburban satire, Estes was able to engage a first-class cast, led by a more than convincing Tobey Maguire, who also cuts a good figure in such a comedic role. But also Elizabeth Banks, Ray Liotta, a wonderfully crazy Laura Linney, "24"-President Dennis Haysbert or "Scandal"-Star Kerry Washington were quite obviously with a lot of fun and commitment to the cause.

The script is filled with many good ideas, which are strongly played and visually excellently implemented. But the staging itself lacks the necessary bite at decisive moments. As a result, some scenes can't unfold their malicious humor well enough, which in turn leads to the fact that the actors' fitting game seems a bit overdone or hysterical. One has the feeling that Estes is always slowing himself down (or being slowed down by studio/producers) so as not to become too politically incorrect and thus drive the audience away. But just a story like this has to be evil and arousing in order to work properly.

All weaknesses aside, the comedy is still worth seeing. Apart from some small pangs, the pacing is just as harmonious as the convincing work of cameraman Sharone Meir and the soundtrack of the collective tomandandy. This in connection with the good actors and some really wonderful scenes also comforts a little bit about the overall too brave staging. If you like entertaining suburban satire, you should definitely help Dr. Lang with his unstoppable downward spiral. Worth seeing!

Picture + sound: The absolutely clean picture of the Blu-ray can convince not only with its very good detail sharpness, but also with a harmonious color scheme and well balanced contrasts. The DTS HD Master Audio 7.1 Mix is, as in a comedy, not unusual, not a real surround firework, but still pleasantly lively in some scenes. All in all, that's enough for a more than satisfied one: Good!

Extras: As a bonus, besides the trailer and further program tips, there is an alternative beginning (approx. 2:01 min.) and the matching alternative ending (approx. 4:41 min.), which actually goes in a completely different direction than the finale used in the film. Even though this more bizarre ending doesn't seem to be quite polished, it would have been a better choice and would have given the movie a bit more bite at the end. But it's nice to see it in the bonus material at least.

Fazit: "Love and other little things" is a well cast small town satire that has some very nice and amusing ideas to offer, but at the end it lacks a bit of malicious bite. Jacob Aaron Estes, director of the great drama "Mean Creek", unfortunately only manages to realize the many good ideas of his script to a limited extent. However, the very good actors, the well-done visual realization and some very amusing moments comfort us over some minor weaknesses and make this comedy absolutely worth seeing! The Blu-ray is also technically convincing and also has an interesting alternative end on board. Recommended