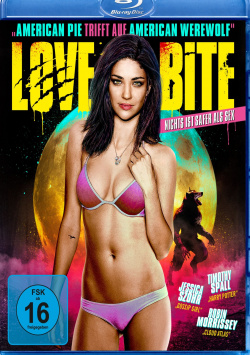 Love Bite - Nothing is safer than sex - Blu-Ray

Film: Life in the English coastal towns of Rainmouth is not really exciting for Jamie (Ed Speleers) and his buddies Spike (Daniel Kendrick), Kev (Luke Pasqualino) and Bruno (Robin Morrissey). While his friends pant after everything that wears a skirt and don't miss an opportunity for childish silliness, Jamie has to struggle with the fact that his mother seems to be completely overwhelmed by the management of her little hotel. A breath of fresh air comes into Jamie's life when he meets the attractive Juliana (Jessica Szohr) at a party, writes the travelogues for a blog and of all places stays at his mother's hotel. Between the two sparks are sparking, but the appearance of the mysterious Sid Aarikka (Timothy Spall), the disappearance of some teenagers from the town and two overzealous policemen make it impossible for Jamie to get closer to his dream girl. His luck, because Sid claims that Juliana is a werewolf who is after the flesh of virgins. And since Jamie and his buddies have never had sex, there's only one way to keep them safe: they have to lose their virginity as soon as possible...

With "Love Bite" Andy De Emmony, who already participated in British cult series like "Red Dwarf""Spitting Image" or "Father Ted", on a mixture of teen comedy a la "American Pie" and horror comedy in the tradition of "American Werewolf". The class of the clear role models cannot reach the work, but it simply lacks - one may forgive the pun - the necessary bite. De Emmony gives away the potential for this in favour of rather flat sex jokes, which primarily go at the expense of Jamies horny buddies. There are a few good laughs here, especially as you are taught some rather unusual names for the sexual act. At the end of the movie you know what "meat gymnastics" is all about. Nevertheless, the jokes are simply too infantile and seem too overused to cause the big laughs.

But there are also aspects that work. The two policemen, who seemingly hang on to Jamie like burrs and constantly show up when he gets closer to Juliana, or Timothy Spall as a crazy werewolf hunter, provide quite amusing moments. And even the small horror movies are quite respectable, despite the obviously small budget. However, all in all they are too sporadically sown to be really attractive for horror fans. First and foremost, fans of teen comedies are addressed, who get two attractive and charming main actors: Ed Speleers ("Eragon") and Jessica Szohr ("Gossip Girl").

Who likes slippery comedies with bawdy wordplay and can enjoy small horror insertions, might enjoy "Love Bite" because of some good jokes and the amusing ending. But those who expect a black humorous genre contribution on the level of "American Werewolf" or who expect humour that doesn't only deal with sexual organs or various bodily fluids won't be able to get anything good out of this amusing anti-chastity campaign.

Picture + sound: The Blu-Ray picture pleases with a high image sharpness, a good balance of contrasts and a harmonious coloration. In the dark sequences there are some slight quality losses, but overall the positive overall impression prevails. The sound can't measure up to the quality of Hollywood blockbusters, but there are a few small surround effects, which sometimes provide pleasant movement in the tonal events. Otherwise, the dialogues determine the sound backdrop, with the German soundtrack sounding much more centrally mixed than in the original English version.

Extras: In addition to the trailer for the film and a brief look behind the scenes (approx. 11 min.), Blu-Ray also has interviews with actors and the director (a total of approx. 30 min.) to offer. Not really much, but the Behind the Scenes Special is well worth seeing.

Fazit: "Love Bite" tries a mixture of werewolf and teen comedy. The comparison "American Pie meets American Werewolf" advertised on the cover is quite true, even if the quality of these models is never reached. But even though some deeper jokes and the effects that aren't very convincing because of the small budget don't leave a really intoxicating impression, the movie's entertainment value is at a decent level at the bottom line. A few very good jokes and the good ending comfort me over some flatter moments. Not a masterpiece, but this home cinema premiere is an entertaining horror teen comedy.