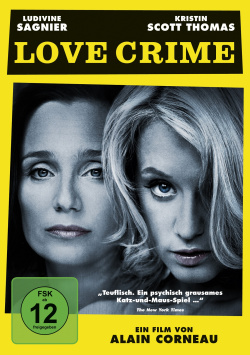 Content: Isabelle (Ludivine Sagnier) is not badly surprised when her boss Christine (Kristin Scott Thomas) claims one of her ideas, which impressed the board very much, for herself and thereby secures a lucrative promotion to New York. Slowly Isabelle realizes that this way she can't make the career she always dreamed of, but that Christine is shamelessly exploiting her. And so she decides to take all her courage together and just turn the tables on her. In fact, she also succeeds in shining herself in front of the board at the next opportunity, which the unscrupulous Christine doesn't like at all. She is now doing everything she can to make her assistant's day-to-day work a living hell and prevent her from becoming a real threat to her own career. In fact, she seems to be able to do so, because Isabelle apparently can no longer prevent small nervous breakdowns even with the help of tablets. But Christine has no idea that this is just a very clever move in a murderous game that has only just begun...

"Love Crime" is the last directorial work of César winner Alain Corneau, who died in 2010. With his thriller about the merciless competition between two women, the renowned filmmaker has presented an exciting and here and there surprisingly cynical look at the elbow mentality prevalent in the business world. The film is carried by two strong leading actresses, whereby Kristin Scott Thomas delivers a really great performance as the ice-cold manager.

The stylish set, the soundtrack and the atmospheric camera work also lend the thriller its very special atmosphere. However, these numerous positive aspects are also countered by a sometimes unwieldy staging that appears too artificial and a significant voltage drop in the last third. The dialogues are presented a bit stilted at the beginning, which makes it difficult for the viewer to dive into the story. But in contrast to the remake "Passion" by old master Brian De Palma, shot in Germany in 2012, which was completely disappointing despite the almost completely identical story, Corneaus Original has enough show and entertainment value to convince despite its weaknesses.

Due to the fact that even after the big twist - which of course should not be revealed here - the tension is noticeably diminishing, since the resolution is no longer a real surprise, the production still has a few aces up its sleeve, which Corneau cleverly placed. Especially the not quite clear ending comforts over some of the dramaturgical lengths and enhances the movie almost at the last second. Still: despite the good story and the convincing actors there is still the feeling at the end that the movie could have been much better and more intense if Corneau had done without some of the scenes that were too cool and artificially staged. Nevertheless there is, especially for lovers of noble French thrillers, a satisfied one: Worth seeing!

Picture + sound: The picture is well realized with its atmospheric coloring and its proper sharpness, whereby the hypothermic atmosphere of the story could be captured very well. The Dolby Digital 5.1 mix remains largely unspectacular, with the clearly mixed dialogues and film music setting the tone. For a quieter thriller this is absolutely sufficient. Good!

Extras: Unfortunately the DVD has no extras except for the trailer.

Fazit: "Love Crime" is a stylish thriller, which can comfort you with an appealingly constructed story and two good leading actresses over some dramaturgical pendants. Even though the French movie is far superior to its unsuccessful remake "Passion" by Brian De Palma, the suspense also decreases after a strong start in the last third. Only Ludivine Sagnier's game can leave a lasting impression here. Those who like French thrillers of the quieter kind will be entertained by this vicious cat and mouse game between Kristin Scott Thomas and Ludivine Sagnier but despite some weaknesses well. Worth seeing