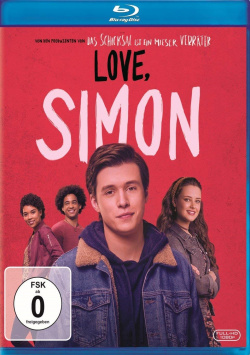 Film: Seventeen-year-old Simon Spier (Nick Robinson) has a loving family, great friends and school is actually going very well. And yet Simon's not really happy. For years he has been carrying around a secret he has never revealed to anyone before: Simon is gay. And he longs for his first great love. When a classmate appears anonymously, Simon begins to communicate with the unknown by e-mail. Finally he can reveal himself to someone, express his dreams and wishes in words. Simon quickly falls in love with his anonymous e-mail friend. But who is the boy? And when was the right time to come out in front of his family and friends?

With "Love, Simon" director Greg Berlanti has followed in the footsteps of the great John Hughes. His coming-of-age story about the first love of a teenager, like Hughes' movies, plays with the everyday worries of teenagers in an entertaining mixture of comedy and drama. Oversubscribed and yet very authentic. Especially the sympathetically drawn characters make the film version of Becky Albertallis novel "Nur drei Worte" an entertaining pleasure, that offers a lot to laugh about, but at the same time also really gets to heart.

Although Simon's homosexuality is of course a big topic in history, the makers have managed not to really put it in the foreground. Rather it becomes quite clear: no matter who you love - dreams, fears, pains and feelings of happiness are always the same. Greg Berlanti, who is currently enjoying great success as a producer of series such as "The Flash", "Supergirl" and "Riverdale", has already had a lot of success in the past with his work on highly acclaimed series such as "Everwood". and "Dawson`s Creek" has proven a good hand for depicting everyday worries on the way to adulthood, once again manages the difficult balancing act between kitsch and closeness to life, between heart and humour.

For this he can rely on a very well chosen ensemble. Main actor Nick Robinson ("Jurassic World") is as well as his co-stars Katherine Langford ("Dead girls don't lie") or Keiynan Lonsdale ("The Flash") not completely unknown, but still unused. The play of the young actors in particular is pleasantly relaxed, which is why the characters they play quickly grow close to the hearts of the audience. She, the sensitive director  and the good script make "Love, Simon" a wonderfully light-footed, charming and clever teenage comedy, which deliberately avoids crude jokes and overly stale clichés and evokes memories of genre classics from the 80s with well drawn characters and amusing dialogues. Absolutely worth seeing!

Picture + sound: The picture is absolutely clean and has a very good sharpness of detail in many scenes. The colour scheme is harmonious and shows its particularly atmospheric side especially in the outdoor shots. So there are no notable defects to complain about here, just as there are with the sound quality. The DTS 5.1 Mix is pleasantly lively and can convince again and again with atmospheric surround moments. But there is one more than satisfied: Good!

>Extras: Besides a very entertaining, unfortunately not subtitled audio commentary by Greg Berlanti (director), Isaac Klausner (production) and Isaac Aptaker (co-writer), the Blu-ray also has two cancelled scenes (approx. 7:48 min.) on board, one of which is very interesting, but would have damaged the tempo of the film significantly. In addition there are short documentaries about the novel (ca. 10:41 min.), the young actors (ca. 9:46 min.) as well as the shooting in Georgia (ca. 5:07 min.) and Atlanta (ca. 2:06 min.). In the course of the cinema release of the film, Greg Berlanti had called for a short film competition on the subject of First Love. The winning clip can also be seen in the bonus material (approx. 1:34 min.). The trailer and a picture gallery round off the additional offer. Good.

Fazit: "Love, Simon" is a wonderful story about the first great love. A light-footed, charming and clever teenage comedy about friendship and tolerance. The Blu-ray presents this feel-good film in good picture and sound quality. And for interested viewers there are also a few extras to see, among which the additional scenes and the audio commentary stand out. absolutely recommended!