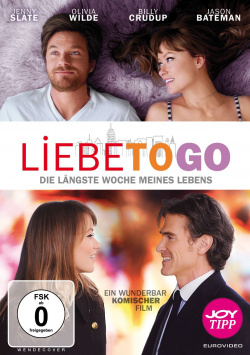 Love to go - The longest week of my life - DVD

Film: As the heir of a heavy hotelier family, Conrad Valmont (Jason Bateman) hasn't really had to work a day in his life yet. The handsome bon vivant spends his time with countless lady acquaintances, at New York high society events or with his psychiatrist. But then Conrad's life changes drastically when his parents, who have been travelling around the world for years, announce their divorce. As if that wasn't bad enough, all accounts are suddenly frozen and the spoiled Flilius can no longer reside in his parents' hotel. Now he has to stay with his only friend, the successful artist Dylan (Billy Crudup). That he is willing to help out with money and a roof over his head doesn't stop Conrad from throwing himself into an affair with Dylan's girlfriend Beatrice (Olivia Wilde). Now he has to lie to the only people he really cares about: He has to hide his love affair with Beatrice from Dylan, while Beatrice is not allowed to know that he doesn't have a cent left. And so the longest week of his life begins for Conrad...

"Liebe to go" is the feature film debut of Peter Glanz, who obviously orientates himself on two great role models: Woody Allen and Wes Anderson. While some visual gimmicks and the slightly ironic narrator are reminiscent of Anderson's films, the figure of Conrad seems to have sprung from an early Woody Allen work. The problem with such obvious role models is, of course, that there is no shortage of comparisons. And glamour cannot (yet) quite keep up with that. His dialogues still lack the last bite and the dramaturgy to be able to actually play in a league with Woody Allen and Co. But that the potential is there, becomes more than clear in many scenes.

Due to the fact that even though some scenes splash a little bit sluggishly along the way and some small lengths emerge, there are always moments full of wonderfully bizarre humor and clever wordplay. The fact that these moments work out really well isn't only because of the good script, but also because of the good-humored play of the actors. Jason Bateman in particular is simply wonderful as an arrogant egomaniac with mimic reduced to the bare essentials. Olivia Wilde as his enchanting object of desire and Billy Crudup as the very earthed counterweight to the spoiled Conrad also make sure that this comedy can be convincing only on an acting level.

Great laughs should not be expected here. "Liebe to go" is more of a comedy of quiet tones that makes you smile with amusement and almost completely does without thigh tapping humor. If you like little arthouse comedies and can also overlook minor weaknesses, you will certainly enjoy this unusual love story in front of the usual atmospheric backdrop of New York. Worth seeing!

Picture + sound: There is nothing wrong with the technical implementation. The sometimes somewhat artificial, very warm colour scheme, which gives the film its very special atmosphere, as well as the good sharpness of detail ensure that the visual implementation leaves an all-round positive impression. For a small comedy like this not uncommon the sound is rather reserved. Big surround moments shouldn't be expected. But the dialogues and the soundtrack are well coordinated, which is why there is also a satisfied "good" here.

Extras: Except for the trailer, the DVD unfortunately has no additional material to offer.

Fazit: "Liebe to go" is a charming comedy somewhere between Woody Allen and Wes Anderson, which doesn't reach the class of the great role models, but which can comfort itself with its somewhat quirky humor and the good actor over small pendants. The DVD presents the film in good picture and sound quality, only the lack of noteworthy bonus material disappoints a little. All in all, a successful feature film debut by director Peter Glanz, which can be warmly recommended to lovers of unexcited independent comedies. Recommended