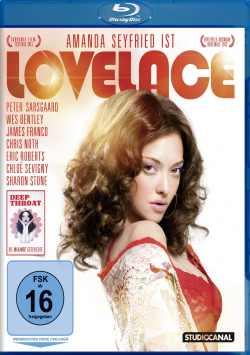 Contents: Davie, Florida in 1970: Here lives the young Linda (Amanda Seyfried) with her very conservative parents (Sharon Stone, Robert Patrick). Too provocative clothes, swearing and of course drugs are absolutely taboo for Linda. Only when she moves around the houses with her best friend Patsy (Juno Temple) does the grey mouse turn into a hot kitten. And that's exactly how she attracts the attention of the attractive Chuck (Peter Sarsgaard), with whom Linda quickly falls in love. It won't be long before Linda burns off with Chuck and goes to seventh heaven. But already after a few months it looks completely different. Chuck becomes violent again and again and also has financial problems that Linda is supposed to solve for him. Because Chuck wants to turn her very special way of giving him a blowjob into money. He introduces Linda to the two porn filmmakers Butchie (Bobby Cannavale) and Gerry (Hank Azaria), who immediately recognize the special talent of the young woman. Linda is persuaded to play the leading role in the sex movie "Deep Throat" next to the well-stocked Harry Reems (Adam Brody) - not knowing how much her life will change as a result. And despite the enormous success, that's not exactly a positive thing...

And this is exactly where "Lovelace" comes in. The film shows both sides of the story. First the rather glamorous one, in which the simple girl becomes a superstar. But then follows disillusionment, when it becomes clear how much Linda is put under pressure by Chuck, how he humiliates her and physically abuses her. And when she tries to get out of this life and find help from her parents, she is especially denied it by her arch-conservative mother. It's actually a very sad story, but Epstein and Friedman don't tell it in a completely depressing tone. Rather, they succeed again and again in loosening up the action with a little humor. Especially the short appearances of James Franco as Playboy boss Hugh Heffner or Adam "OC California" Brody as porn star Harry Reems are extremely amusing.

The harmonious equipment and the integration of archive recordings into the film - for example in the legendary interview of Linda Lovelace with talk show legend Phil Donahue - underline the positive overall impression. Here and there the staging seems somewhat powerless and clearly lags behind its possibilities. But even if the drama hasn't become as interesting as the great documentary "Inside Deep Throat", the bottom line is still clear: Worth seeing!

Picture + sound: The visual implementation of Blu-ray captures the 70s feeling of the production very well. Colouring, filters, contrast adjustment and image sharpness - all this ensures a very authentic look. The sound is available in a convincing DTS HD Master Audio 5.1 mix, which harmonises dialogue and music well with each other. It's only noticeable that the dialogues in the original version seem a bit more naturally integrated into the tonal events and sound a bit more front-heavy in the German soundtrack. Good!

Fazit: "Lovelace" is an ambitious look at the tragic career of a young woman who first becomes a porn star and then a figurehead of the sexual revolution. Rob Epstein and Jeffrey Friedman, with the support of a superb cast, have attempted to show two sides of Linda Lovelace's story. The result is a drama which is convincing over long distances and which works especially well as a supplement to the excellent documentary "Inside Deep Throat". The Blu-ray is technically well implemented and the bonus material is also worth seeing - although subtitles would have been desirable especially at the Berlinale press conference due to the not quite perfect sound quality. All in all this is still enough for a clear one: Recommended!