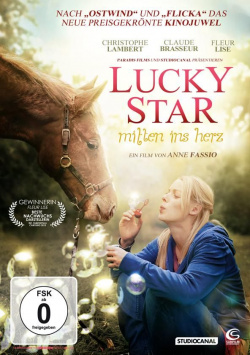 Film: Louise Marthelemy (Louise Fleur) lives an idyllic life with her parents on the home equestrian farm. The very special bond that exists between her mother and the animals brought the horses of the family many successes and the farm a lucrative income. But when Louise's mother dies, her father Pierre (Christopher Lambert) lets himself be completely taken in by his grief. Although Louise quits school and tries to limit the damage together with the faithful estate manager Robert (Claude Brasseur), the court is unstoppably heading for bankruptcy. The new mare Marquise, to whom Louise builds a very special bond, could finally bring the necessary success again after years. But first Louise has to complete the difficult training to become a jockey. While the girl tries to become a really good rider and also finds her first love in the young teacher Julien (Antoine Berry), the situation around her father's farm gets worse and worse - so bad that Marquise is seized. Thus every hope for a rescue of the equestrian farm seems lost...

"Lucky Star" is a beautifully photographed horse film that suffers a little from its indecisive staging. From the pictures and some elements of the story it could be seen as a typical girl's film with classic "Wendy" romance. What doesn't fit, however, is that main actress Louise Fleur looks much older than 18 years. So she's not really the perfect identification figure for young girls. Moreover, in many moments the whole thing seems too much like a family drama, which a young target audience could also be bored of. Whenever the events revolve around the mare Marquise and the budding love between Louise and Julien, girls get exactly what they can expect from a typical horse movie: great pictures and a little tender romance.

The actors do their job well throughout. Whether old star Claude Brasseur ("La Boum"), "Highlander" Christopher Lambert or Louise Fleur, they all raise the movie to a good acting level. The music and the camera work are also convincing. The cut, on the other hand, is disturbing. Too often it seems as if director Anne Fassio has forgotten a scene or finished it too early. A bit bumpy she gallops through the story and makes it clear to the viewer that just a few weeks or even months have passed. Large conflicts are built up, which are then resolved in passing. For example, the suspicion arises that Marquise was doped during a run. A real drama that can only be resolved via Louise's Voice Over commentary.

This gives the story an almost episodic character. She simply lacks a homogeneous narrative flow that really ties the viewer to the action. So the movie is nice and pretty to watch, but unfortunately a bit boring and insignificant. After all: the pictures and the positive aspects are enough to make "Lucky Star" worth seeing, at least for lovers of horse movies with a pinch of romance and drama. With a more clearly defined target group and a more carefully worked out story this would surely have been a very nice movie for young and young-at-heart girls. So "Lucky Star" is nothing more than nice entertainment for horse fans - but not less!

Picture + Sound: The beautiful landscape shots of Normandy come to the fore thanks to the warm colors and the neat overall sharpness. Apart from a few small blurs in the reproduction of smaller details in darker scenes, the picture spreads pure horse romanticism. The sound, as usual for this genre, is mainly determined by dialogues and music, a few well implemented sound effects such as the trotting of the horses, however, also provide some dynamics in the surround channels again and again. Good!

Extras: Unfortunately, as a bonus there is only the trailer and further program tips of the provider.

Fazit: "Lucky Star" is a visually very appealing horse fairy tale, which meanders somewhat indecisively between typical girl's film and family drama. Dramaturgical weaknesses, however, are captured by the nice pictures, which is why the whole thing turned out to be quite recommendable for fans of horse movies despite its weaknesses. The missing bonus material does not change this either