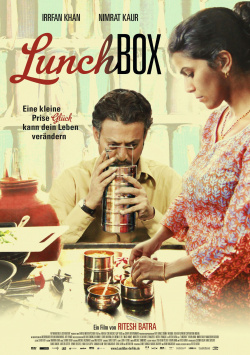 It's a perfectly sophisticated system with which the Dabbawallas transport thousands of lunchboxes every day across the megacity of Mumbai from caring wives to the workplace of their hungry husbands. The young Ila (Nimrat Kaur) also makes use of this service. Hoping to add new spice to her marriage, Ila wants to try out some new, more sophisticated recipes. But unfortunately the food doesn't end up with her husband, but with Saajan (Irrfan Khan) who is about to retire and who is more than surprised by the quality of his supposed delivery service. When Ila realizes that her lunchbox is being delivered to the wrong address, she attaches a message to the next delivery, to which she promptly receives a reply from Saajan. A pen friendship quickly develops between the two strangers, which brings a little comfort and hope into their otherwise rather dreary lives and which could change their future forever…

Whoever expects a typical Bollywood movie at "Lunchbox" will be bitterly disappointed. Nevertheless, lovers of Indian cinema shouldn't miss the work any more than any other viewer who likes small, tender arthouse films. The young Indian director Ritesh Batra has staged a really nice feel-good movie that can convince on several levels. The first thing that stands out is the visual level. The opening sequence, in which the viewer can follow the path of a lunchbox through Mumbai to the recipient's desk, is simply brilliantly implemented and perfectly captures the pulsating life in the metropolis of millions in just a few minutes. And also in the further course the film has to offer again and again a very engaging picture language, into which Batra has perfectly embedded his charming story.

That brings us to the dramaturgical level. It is true that the wheel is not reinvented here. But the way in which Batra tells of two lonely people giving each other comfort and hope in an unusual way is very lovable and even has a few little surprises to offer here and there. Especially as far as the ending is concerned, Batra's script certainly doesn't live up to the expectations of many viewers. But even if you might be a little disappointed about the outcome at first, it soon becomes clear that no better ending could have been chosen. And also the fact that the story is always a little humorously loosened up with the help of the character of Saajan's successor Shaikh underlines the charming character of the production.

The third convincing level of the film are the acting achievements. Especially Irrfan Khan ("Life of Pi") as Saajan, who is completely withdrawn, a bit grumpy and disappointed by life, who slowly finds his love for life in his lunchbox through the messages, delivers a really great performance. But also Nimrat Kaur and Nawazuddin Siddiqui fill their characters with a lot of life, so that you as a viewer can easily bond emotionally with them.

"Lunchbox" is perhaps not the big revelation, not a film for eternity or a really lasting cinema experience. But it's just a nice little movie that makes its audience happy and makes a short escape from everyday life possible. And that alone is enough to attest this wonderful friendship story a convinced "worth seeing".