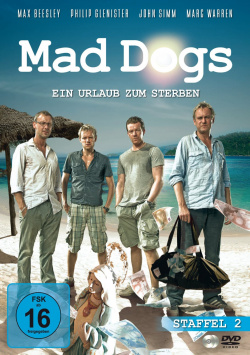 Contents: What should become a relaxed men's holiday, a relaxed reunion of old friends, has developed into a real nightmare for Rick (Marc Warren), Baxter (John Simm), Woody (Max Beesley) and Quinn (Philip Glenister). After their friend Alvo, in whose villa they had met in Mallorca, was murdered by an unknown man, the four men were drawn into a dangerous web of drugs, money and intrigue. The whole thing ended with the death of a corrupt policewoman and the possibility for Rick, Baxter and Woody to leave the island and return to their normal lives. But at the last moment, they decide to go back to save Quinn. Now there is one more dead person and only one possibility to leave the island: by ferry. It's just too bad that in the heat of the moment they drive on the wrong ferry and land on Ibiza, where a lot of new trouble is waiting for the men. Cause Baxter kept the drug money and made them all potential millionaires. But in order to enjoy the new wealth, the money must first be laundered. A seemingly accidental encounter with the mysterious Carmen (Leticia Dolera) could quickly solve this problem. But of course Ibiza also has some surprises in store for the quartet, especially as the owner of the money (David Warner) wants to get his five million euros back at any price. And so the next holiday paradise for the "Mad Dogs" turns into a real hell...

Season 2 of the series "Mad Dogs" follows directly after the end of the first season and continues their story in the same style. Humor, drama and thriller mix here in a very entertaining way to an exciting story about friendship, letting go of unfulfilled dreams and dealing with the loss of youth. As in the first episodes, there are some dialogue sequences that are a bit too long and slow down the action a bit. But boredom never comes up. Series creator Cris Cole and director James Hawes know how to prevent this very well, for example through an episode in which you get to know more about how Alvo (Ben Chaplin) got into the drug story, which is ultimately deadly for him, through flashbacks and who is pulling the strings in the background.

The good chemistry between the actors, for whom this series was a dream project anyway, as they all wanted to work together (again) at all costs, also comforts some small dramaturgical hangovers. In addition, the change from Mallorca to Ibiza also provides a little fresh wind. The mere fact that the makers remain true to the concept of location change also in season 3 makes the sequel in the mood, which is intensified by the nasty cliffhanger at the end of the last episode of season 2.

"Mad Dogs" offers bitter humor, dark drama, suspense and a little bit of action. If you can see over smaller lengths, you get very entertaining, but with four episodes also very short TV entertainment, which is carried by a great cast of actors. The next episodes can't come fast enough. Worth seeing!

Picture + sound: For a current TV production, the implementation of picture and sound on the DVD is at a good to very good level. The very clean image has a decent overall sharpness, which only in the darker scenes shows small quality losses like a slight image gravel. On the other hand, the second attempt was also very positive with the colour scheme, through which the sea and the landscapes of Ibiza come to the fore very well and despite the explosive history spread a real holiday atmosphere. The sound mixed in Dolby Digital 5.1 isn't really spectacular, but it has some sound effects like explosions, sea noise or tyre squeaks to offer some decent surround moments. This is absolutely satisfactory for a TV series. Good!

Extras: As a bonus there is a trailer on the first DVD and on Disc 2 some short interviews with the actors.

Fazit: "Mad Dogs" also continues the successful mixture of thriller and drama spiced with bitter humor in an exciting and amusing way in season 2. The old youth friends consistently maneuver themselves from one mess into the next until a return to their old life seems almost impossible. The very short season with four episodes presents itself on two DVDs in good picture and sound quality, only the extras are even leaner this time than in the first season. But given the quality of the series, this is easy to get over. And that's why there is a more than deserved one for this set: Absolutely recommendable!