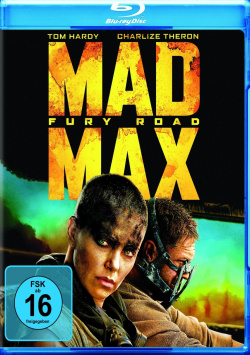 Film: Fans had to wait 30 years, but now it's finally time: George Miller shot a new "Mad Max" movie. The plans for this have been in place for a long time. The last time in 2003 it looked as if the fourth part would become reality and that Mel Gibson would slip back into the role that really started his career. But despite an approved budget and committed leading actors, the project had to be put on hold again and after Gibson announced his exit, it looked as if the project had died completely. But George Miller wasn't willing to give up his baby just like that. He continued to fight, rewrote the script, hired Tom Hardy as a new lead actor and in 2012 the cameras were finally up and running. After extremely difficult shooting and extensive re-shooting, the result "Mad Max - Fury Road" finally came to the cinemas in 2015.

The story is quickly told: The former cop Max Rockatansky (Tom Hardy) is despite all caution in the clutches of the warlord Immortan Joe (Hugh Keays-Byrne). From now on he only serves as a blood donor for the young warrior Nux (Nicholas Hoult). When the fighter Furiosa (Charlize Theron) steals his most valuable asset from the tyrant - five young women who were supposed to be mothers to ensure the survival of Immortan Joe's empire - the tyrant mobilizes his motorized troops to stop Furiosa and the other women. Chained to the car of Nux, Max is now in the middle of a war of which he didn't want to be a part anymore...

Based on the problems "Mad Max - Fury Road" had to deal with long before the actual shooting, you might think that this production wasn't under a good star. And after all the time and money that Miller and the studio invested in the development, it could have been assumed that those responsible had insisted on playing it safe in the staging in order to reach as wide an audience as possible. But the big surprise is that exactly this is not the case. Apparently Miller was left with complete creative freedom, which he lived out in an impressive way. The design of the vehicles alone, certainly also thanks to the very long planning phase, is simply great, eccentric and unadapted down to the smallest detail - just like the rest of the staging.

That the film actually doesn't offer a particularly polished story and has hardly any dialogues may sound negative at first. But George Miller knows how to tell more with his pictures than many an overflowing dialogue would have managed. It doesn't matter if you have seen the earlier movies or if you meet the lonely Road Warrior for the first time here, after a few moments you know exactly in which world Max lives, which rules apply there and what Furiosa and the women she wants to free are at stake. Even though Miller actually doesn't show much more than a two hour chase through the desert, there is more to it than it seems at first glance. Certainly, the story does not become more profound through the power of the images and the ingenious direction. This almost purely visual narrative style is impressive.

The look of the film is as wild, crazy, sick and extravagant as the action. Thus "Mad Max - Fury Road" on the one hand clearly eludes the mainstream, but at the same time offers the best food for lovers of modern action cinema. This may be very special and takes getting used to, but what you get in return for getting involved is definitely worth the effort of open-mindedness. For most of the time Miller didn't use the CGI-effects that are so popular with his colleagues and presents a lot of real stunts, in which the viewers often take their breath away. But even when he's obviously using visual effects, Miller still knows perfectly well how to prevent his movie from looking too smooth and perfect. Because the world of "Mad Max" is dirty, ugly, sick and spoiled. One of the most positive surprises of the 2015 film year is that this can be celebrated so unchecked in an estimated $150 million blockbuster.

"Mad Max - Fury Road" is a noisy, wacky, explosive, fascinating and disturbed trip that has enormous show value and a high entertainment value. If you don't expect a smooth look and sophisticated dramaturgy, you can still experience great cinema in the best sense of the word at home. An apocalyptic action trip with many corners and edges, which has more than earned its "Absolutely worth seeing"!

Picture + Sound: The audiovisual realization of the film for Blu-ray can be convincing in almost every respect. The image has a pleasant depth and excellent sharpness of detail. The harmonious colour mixture also supports the very positive overall impression, which is not disturbed by blurring or other weaknesses even in the darker moments. The powerful sound is in an extremely lively Dolby Atmos mix, which makes it really crack in almost every second on all channels. What more could you want? Very good!

Extras: Blu-ray is also worth its money when it comes to bonus material. We start here with a very interesting view of the shooting (approx. 28:38 min.) and the many difficulties the team had to overcome. Almost even more interesting is the view of the cars and their design (approx. 22:37 min.), before in another short documentary Max & Furiosa will be the focus (approx. 11:18 min.). But also the charms of the five other women get their own featurette (ca. 11:11 min.). One of the highlights of the bonus material is the view of the equipment and the props (approx. 14:26 min.), which clearly shows how much love for detail was put into the work here. A mixture of test shots, rough cuts and behind the scenes material shows impressively that real stunts were mainly produced for the film (approx. 4:02 min.). Really breathtaking. At the end of the 90 minute bonus package there are three short unused scenes (ca. 3:20 min.). Very good!

Fazit: "Mad Max - Fury Road" is loud, eccentric, wild, brutal and pleasantly unadapted. Director George Miller has not only whistled at all common action conventions, but has also largely done without computer effects. And that's exactly what makes this end-time thriller one of the best action films of recent years. The Blu-ray presents the film in excellent picture and sound quality and the bonus material is also convincing. But there is only one possible conclusion: Absolutely recommendable!