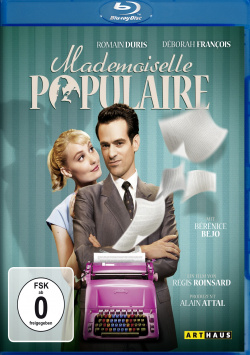 Film: From the moment Rose (Déborah Francois) first put her fingers on the keyboard of a typewriter, she has only one big dream: she wants to escape the simple life of a small town and the job in her father's corner shop and become the secretary of a successful businessman. When she learns that a job is being offered in a nearby town, she secretly applies to the attractive Louis Echard (Romain Duris). But the competition is fierce; after all, secretary was the dream job for women in the 50s. But although Rose is actually completely untalented, Louis is extremely impressed by her speed. Rose gets the job and after she has caused a lot of chaos in the office, Louis makes her another suggestion: he wants to train her for the regional typing competition. Rose accepts the offer, not suspecting that her life will change completely soon...

With "Mademoiselle Populaire" Régis Roinsard has staged a harmless, but really enchanting romantic comedy, which in its best moments awakens nostalgic memories of the screwball comedies of the 50s. Roinsard's feature film debut was inspired by a documentary about the typewriter, which included a short excerpt from a typing competition. Since there were hardly any real documents about these competitions, the young filmmaker's research had to be limited to individual Internet videos, in which it became clear, however, that these competitions had in fact been real crowd-pullers in the past.

With a very affectionate equipment, Roinsard revives the 50s very authentically, whereby his film does not look dusty through editing and staging, but very modern. It is this mixture that gives the film its special flair. With Déborah Francois, the director found the perfect cast for the female leading role. Francois perfectly portrays the transformation of the shy girl from country to self-confident "Mademoiselle Populaire" in a lovingly charming way. Roinsard wanted her to be a mixture of Audrey Hepburn, Shirley MacLaine and Marilyn Monroe, who combine comedic timing, naturalness and sex appeal. And Francois has more than convincingly complied with this wish.

At her side Romain Duris once again proves his sense for comedic timing, although as an extremely dogged and introverted Louis he is not necessarily the greatest sympathizer. But fortunately the staging is accurate and his performance charming enough for the audience to wish for something to develop between Louis and Rose. This romance is Roinsard's very nice integration into the success story of the quick tipper Rose, so that she is omnipresent, but doesn't dominate the movie with exaggerated kitsch.

Although the humor is sometimes a bit overdone and the actors' play could have been a bit more reserved in some moments, "Mademoiselle Populaire" is a really likeable, nice movie, which allows the audience to switch off completely for almost two hours and let themselves be lulled by the cosy warmth of nostalgia. Anyone who appreciates the French entertainment cinema and would like to travel back to the 50s should not miss this charming comedy. Worth seeing!

Picture + sound: The absolutely clean picture of the Blu-Ray is particularly appealing due to its powerful color scheme, which gives the film its very special flair. But also the sharpness of the images and the contrast coordination confirm the positive impression. The sound mixed as DTS-HD Master Audio is, as usual for the genre of romantic comedy, rather reserved. The main focus here is on dialogue and music. But there are also always smaller sound effects and harmonious ambient noises, which also use the surround channels. Good!

Extras: The bonus material of the disc starts with a quite decent making of (about 27 min.), which offers an informative insight into the making of the film by means of interviews and behind the scenes footage. The whole thing is complemented by five 2-3-minute featurettes on selected aspects of the film such as its 50s look, the romance or the origins of the project. In addition there are three interviews with Deborah Francois (ca. 5:17 min.), Romain Duris (ca. 5:18 min.) and director Régis Roinsard (ca. 8:26 min.). Especially between the featurettes and the interviews there are overlaps again and again, which is why the interviews have hardly any new information to offer after watching the Making ofs and the short documentations.

A German-language Promo-Featurette (ca. 3:17 min.).) and the trailer to the film complete the additional offer of the Disc.

Fazit: "Mademoiselle Populaire" is a sympathetic romantic comedy from France, which provides with a charming leading actress and an infectious 50s feeling for very beautiful and entertaining nostalgia. Those who like French entertainment cinema of the particularly light-footed kind should not miss this amusing journey through time. The Blu-Ray is technically well done, the bonus material is decent, but a bit superficial at times. The bottom line, however, is that this is perfectly sufficient for a satisfied one: Recommendable!