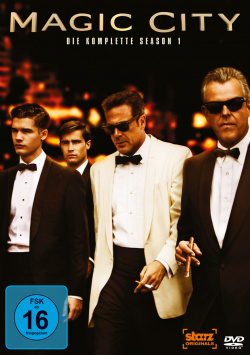 Content: Miami Beach, late 1950s: Ike Evans (Jeffrey Dean Morgan) fulfilled his dream of his own hotel with blood, sweat and tears. But he was not able to open the luxury hotel Miramar Playa all by himself. For this he needed the help of his silent partner, the Mafia boss Ben "The Butcher" Diamond (Danny Huston). In front of his second wife, the former showgirl Vera (Olga Kurylenko), and in front of his children Danny (Christian Cooke), Stevie (Steven Strait) and the little Lauren, he maintains the facade of the righteous hotel owner and family father. But in secret he fights by all means to keep his hotel. And he can't help but have to ask Ben Diamond for a favour.

Because after two severe hurricanes and trouble with the unions that want to put pressure on Evans to join them, the future of the Miramar is hanging by a thread. But when union boss Mike, with whom Ike had a close friendship, disappears without a trace, he slowly realises the dangerous means his silent partner is playing with. The political situation in Cuba, the relationship between Danny and his childhood sweetheart, the chambermaid Mercedes (Dominik Garcia-Lorido) and Stevies affair with Lily (Jessica Marais), the pure sin that turns out to be Ben Diamond's wife of all people, make the hotel's foundation walls shake and Ike's big dream collapse...

It is obvious that "Magic City" was born in the wake of the success of series like "Mad Men" and "Boardwalk Empire". Dramaturgically, the events around the Miramar Hotel are a bit simpler knitted than these two, nevertheless, clearly more complex role models. Instead, as with its "Spartacus" series, STARZ focuses on suspense, lots of sex and a little violence. And this also works really well in the case of "Magic City". On the one hand, this is due to the very appealing visual implementation. Very warm, inviting colors, a trendy 50's outfit, chic cars and beautiful people - sometimes more, sometimes less, sometimes not dressed at all - make the series a feast for the eyes.

Either way the series can score with a very good cast. Jeffrey Dean Morgan convinces as a hotelier, who has a good heart for himself, but is willing to cross moral boundaries for his dream. Danny Huston is a wonderfully greasy Mafia boss with an ice-cold threat and an extremely high entertainment value. Jessica Marais plays Huston's series wife, who as a seductive siren not only turns Stevie's head. Olga Kurylenko, on the other hand, who is also known from numerous movies, can't show much more of her talent than looking good. But for the role of the former showgirl, who desperately tries to step out of the oversized shadow of her husband and create something important herself, she is absolutely apt.

The dramaturgy is, as already mentioned, very straightforward and not overly complicated. Nevertheless, the individual storylines of the first season offer very good entertainment. Whether the attempts of the greasy senior prosecutor Jack Klein, Ben Diamond and also Ike Evans to deliver to the knife, Stevie's dangerous affair with Lily, the burgeoning relationship between Danny and his youthful love Mercedes, or the desperate attempts of her father, the hotel manager Victor Lazaro (Yul Vázquez), to free his wife from the Cuba occupied by Castro's rebels, make all these elements of the plot".Magic City" to an extremely entertaining and stirring series.

It's a pity that after only two seasons the game is over again. Because after the eight episodes of this first season, the events from Miami reveal a potential for many more entanglements and explosive escalations. At least it will go on after the open final of the first season. It remains to be hoped that we in Germany will not have to wait too long for the final episodes. Absolutely recommendable!

Picture + sound: The picture quality of the DVD is the very good 50s look of the series absolutely fair. The colour scheme is very authentic, whereby the warm tones in particular come into their own. The image sharpness is on a very good level and even in the darker scenes there are hardly any visible quality losses. The sound is present in a harmonious Dolby Digital 5.1 mix, whereby strong surround moments are rather scarce here. It's more the ambient noise and more subtle sound effects that bring some life to the multi-channel area. Apart from that the dialogues and the great soundtrack set the tone, whereby both sound well coordinated from the speakers. Good!

Extras: As a bonus the box on the third DVD has some worth seeing features to offer. Beside a Making of (ca. 12:59 min.) there are even shorter contributions to the cars of the series (ca. 1:29 min.), to the style of the series (ca. 3:53 min.), to the construction of the scenery (ca. 1:29 min.), to music (ca. 7:26 min.) and about the real Miami Beach (ca. 3:21 min.). Most of these features are simply too short to provide really in-depth information. These encores are definitely worth seeing for fans of the series!

Fazit: "Magic City" is an entertaining drama series, which is located somewhere between "Boardwalk Empire" and "Mad Men", but dramaturgically not in the same league as these award-winning series. Performers, equipment, music and camera work, on the other hand, are absolutely first-class. The staging itself is dense enough to let some clichés notwithstanding quickly create tension and to draw the viewer deep into the world of Miramar Playa. With a great soundtrack, an engaging look, a lot of naked skin and a wonderfully nasty Danny Huston, the series also succeeds in offering eight episodes of entertaining, thrilling and thrilling entertainment, which is complemented on DVD by a harmonious conversion of image and sound, as well as a few extras worth seeing. The bottom line is clear: Absolutely recommended!