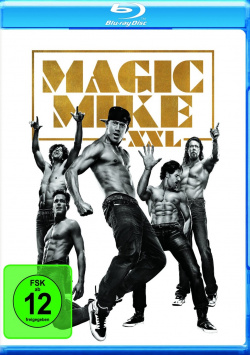 Content: Three years ago Mike (Channing Tatum) said goodbye to his career as a stripper with a furious show. In the meantime he has settled down and built up a small company. After Dallas and Adam also left the "Kings of Tampa", the other dancers now see the time for a change as well. They want to disband the troupe for good after one last appearance in Myrtle Beach. For Mike this is a good reason to break out of his retirement once more, to travel the country with the boys one last time and to drive the women crazy with his moves. But of course the farewell should be absolutely spectacular. So Mike persuades his buddies to rehearse a whole new choreography especially for this last performance, which will not only be remembered by the audience but also by them for a long time…

After Steven Soderbergh's "Magic Mike" was able to record well over 160 million dollars worldwide with a budget of just 7 million dollars, the decision to want to stage a sequel was not particularly difficult for those responsible. After Soderbergh had announced his withdrawal from the cinema, Matthew McConaughey was no longer available for the sequel and Alex Pettyfer had quarreled so much with Channing Tatum and other participants on the set that he wouldn't be part of it again, it was clear that a second part wouldn't be able to fully build on the success of the debut. However, in order to be able to enthuse as wide an audience as possible for the film, "Magic Mike XXL" was completely tailored to the well-built bodies of the crew around Channing Tatum.

The slightly satirical undertone of the original is just as little left over as the unembellished view of the dark sides of life as a stripper. Part 1 could have been much more profound here, too. But in a direct comparison, the sequel staged by Gregory Jacobs ("The Icy Death") is an extremely superficial meat inspection for girls' evenings with lots of prosecco. That doesn't make the film bad, of course. Only in direct comparison with the first part the XXL version doesn't do very well.

Otherwise "Magic Mike XXL" has enough entertainment potential to inspire its target audience. The dance/strip interludes are - one must also acknowledge this as a man without envy - staged first-class and performed by the actors credibly and very professionally. But there are also some very amusing scenes - for example when Big Dick Richie (Joe Manganiello) wants to prove in a petrol station supermarket that he can make the bored cashier smile with spontaneous dance interludes or when Mike and Zoe (Amber Heard) meet for the first time. Even a few quieter buddy moments and a flash of self-irony here and there save the work from insignificance.

Although "Magic Mike XXL" is more for the (female) eye than for the intellect and the quality of its predecessor is not achieved, the film offers its audience exactly what it promises: entertaining entertainment - no more, but no less. And in return there is a slowly defoliating one at the end: Worth seeing!

Picture + sound: The Blu-ray presents the film in good picture and sound quality. The visual implementation pleases with a high image sharpness and a powerful color mixture. The matching of contrasts and black values is also on a good level and supports the consistently positive overall impression. The sound is available in the English original in a rather lively DTS-HD Master Audio Mix, which ensures that there is movement in the multichannel range again and again with proper surround effects. The German soundtrack offers only a Dolby Digital 5.1 mix, which is a bit weaker, but especially in the dance interludes with decent bass and a satisfactory utilization of the multichannel range can convince. Good!

Extras: The offer is unfortunately a bit meager. In addition to a standard making of (approx. 8:10 min.) there is only an extended dance sequence (approx. 3:35 min.). That's it.

Fazit: "Magic Mike XXL" unfortunately lacks the hidden wit and the interesting character drawing of the original. But if you just want to watch some pretty guys dancing and stripping and want to see a quite entertaining road movie, you'll be well served here. The Blu-ray offers a good conversion of image and sound. Only the bonus material, just over 10 minutes long, is a real disappointment. The bottom line, however, is that all this is still enough for a satisfied one: Recommendable!