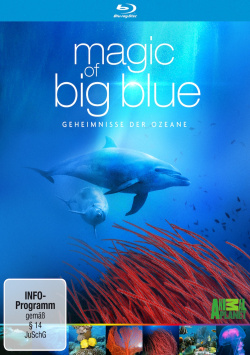 Magic of Big Blue - Secrets of the Oceans - Blu-ray

Content: A total of 71% of the earth's surface is covered by oceans. The oceans represent an incredibly diverse and extreme habitat that is still unexplored in many places and therefore still holds many secrets for humans. However, the sea is also a very fragile ecosystem, which is sustainably damaged in many places by human influence, which can have catastrophic consequences for sea dwellers, humans and the entire planet. But first and foremost, our oceans are absolutely fascinating habitats full of small and large wonders. The underwater photographer Darek Sepiolo takes his viewers into these unique worlds in the series "Magic of Big Blue" produced for the Discovery Channel and Animal Planet and shows them extremely spectacular pictures that simply make them want to explore the "secrets of the oceans" together with Sepiolo and his team.

Each of the seven episodes deals with the underwater worlds before a continent. It goes from Asia via Australia and South America to Europe, Asia, North America and Antarctica. The coastal landscape and the history of the respective country are often briefly presented. But the main focus is on the sea and its inhabitants. The spectator gets to know hawksbill turtles, thresher sharks, spectacled penguins, the yellow-blue boxfish, hammerhead sharks or the jack mackerel, dives over fascinating underwater grass meadows or colourful coral reefs, is taken to dark caves or to majestic rocky coasts. If you like documentaries of this kind, you won't necessarily be confronted with something completely new all the time. What makes this series so interesting is that it shows very nicely how the sea dwellers and plants adapt to the respective living conditions or how they protect themselves from predators. One learns, for example, why clownfish can hide from their enemies in anemones, whose tentacles are actually poisonous. Or how sardines join together to form a kind of super swarm so that they can defend themselves against their predators in the community. At the same time, however, it is also shown how vulnerable this ecosystem is and what far-reaching consequences its disruption can have. However, it does not place too much emphasis on depressing visions of the future and overly intrusive environmental protection messages. Rather, important information is incorporated into the beauty of the images in such a way that it can manifest itself so much more effectively in the consciousness of the audience.

Thus, nobody needs to fear that "Magic of Big Blue" is too masterly. Darek Sepiolo and his team have staged a really great documentary series, which is simply beautiful to watch and also provides a lot of interesting, amusing, exciting and also stirring information. If you like documentaries like "Our Earth", "Our Oceans" or "Deep Blue", you should have a look here - either in 2D or in 3D!

Picture + Sound: The image of the Blu-ray convinces with an excellent image sharpness and a wonderful coloring. In many scenes even the smallest details are well recognizable and really visible weaknesses aren't noticeable even in very dark moments. In addition, the Blu-ray has a very good image depth, which draws the viewer directly into the underwater world even in the 2D version. The sound is absolutely satisfactory for a nature documentary. The powerfully mixed voice-over commentary and the very authentic sound backdrop leave a positive impression just like the picture quality. Very good!

Extras: Unfortunately the Blu-ray has no extras to offer.

Fazit: "Magic of Big Blue" is a fascinating journey through our oceans. In seven episodes the underwater photographer Darek Sepiolo takes the audience into fascinating underwater worlds around all seven continents. The series, produced by Discovery Channel and Animal Planet, presents the ecosystems and their inhabitants on Blu-ray in excellent picture quality, which can also make up for the lack of additional bonus material. For lovers of powerful and informative nature documentaries absolutely recommendable!