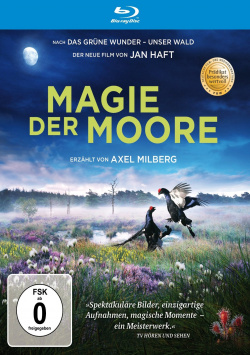 Magic of the Moors - Blu-ray

Film: After Jan's imprisonment brought us closer to the miracle of the forest in his last film, he abducts us into the "Magic of the Moors" in his latest work. In wonderful pictures he presents this fascinating habitat and its inhabitants. Using the latest slow-motion and time-lapse techniques, over 500 days of filming the film produced magnificent shots that can unfold their full splendour on the big screen. However, the film is a bit tough at the beginning. Here it becomes noticeable that there have simply been too many animal and nature documentaries in recent years and that the market is actually saturated. But at the moment when the viewer realizes how important the moor is for our entire environment, how versatile its manifestations are and how diverse the flora and fauna in the various moor landscapes are, this documentary will also take you back to your roots.

Whether you are carnivorous plants at close range at "work can observe, accompany cranes feeding their young, roam with wolves and bears through the moorlands or get to know mosses whose spores literally explode - thanks to the elaborate camera techniques and the enormous patience of the crew, shots could be captured at a total of 80 locations in Germany, Finland, Sweden, Denmark, Norway and the Czech Republic, which quickly forget the somewhat lengthy beginning. The commentary by Axel Milberg, which is not always necessary but is very pleasantly spoken in, fills the picture rush with a lot of exciting information.

For example, the viewer learns about the dramatic influence the draining of moors has on the global climate and how easy it is to "restore" moors in principle. One gets to know the variety of living beings that have adapted perfectly to the special environment of the moors and have found an important habitat here, which man takes away from them more and more. But even if the movie sounds like it and even raises the moral index finger, it never seems to be too masterly. Like "The Green Miracle - Our Forest", "The Magic of the Moors" is not only a beautiful film, but also an important one that conveys the necessity of nature conservation in a fascinating way. A technically and dramaturgically first-class documentary, which not only nature lovers should not miss. Worth seeing!

image + sound: The image has a high overall sharpness and a very natural-looking coloration. Together with the good contrasts and the pleasant image depth, this results in the overall impression left by the image quality of the Blu-ray being absolutely positive. This also applies to the sound mix, which is determined not only by the narrator's voice and the music, but also by the atmospheric sounds of the moors and their inhabitants. Good!

Extras: As a bonus there are five entertaining webisodes, which are very short with a total length of about 6 minutes. One would have liked to know more about the camouflage hiding places of the crew. In addition to these clips there are even more detailed interviews with speaker Axel Milberg (ca. 10:39 min.), Jan Haft (ca. 14:36 min.) and Melanie Haft (ca. 3:46 min.), as well as a very nice, informative booklet. Good!

Fazit: "Magic of the Moors" is a very nice and highly interesting documentation about the moor habitat, which offers not only great pictures, but also informative and important information about the importance of the moors for our world climate. A film worth seeing, which is presented on Blu-ray in very good picture and sound quality. The bonus material isn't really extensive, but a good addition to the main movie. There's one for that altogether: absolutely recommended!