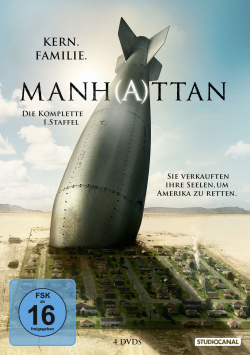 Contents: In 1942, the US government built a hermetically sealed research station in Los Alamos, New Mexico, in which brilliant minds around the physicist J. Robert Oppenheimer are working on the so-called "Manhattan Project". This is where the world's first atomic bomb is to be built, even before the enemy in Germany has developed such a destructive weapon. It's a race against time, accompanied by paranoia and espionage. This creates an enormous field of tension in which the families of the scientists are also trapped. Among them is Frank Winter (Benjamin Hickey), the head of the research team, whose obsession and bossy management style not only affects his staff, but also his wife Liza (Olivia Williams) and his 17-year-old daughter Callie (Alexia Fast). The more the pressure on researchers increases, the more urgently ingenious minds are needed to help the US make the Manhattan project a success. One of these prodigies is the young physicist Charlie Isaacs (Ashley Zukerman), who came to Los Alamos with his wife Abby (Rachel Brosnahan). Charlie wants to change the world - but what awaits him here he didn't expect…

The series "Manh(a)ttan" is a semi-fictional account of the events surrounding the construction of the first atomic bomb. The plot is inspired by true events and characters, but is complemented by dramaturgical freedoms and fictional characters. The series was conceived by Sam Shaw, who already wrote for the celebrated series "Masters of Sex". Thomas Schlamme, among others, has been won for directing the Aaron Sorkin series "West Wing", "Sports Night" and "Studio 60 on the Sunset Strip" and has been awarded a total of 9 Emmys. And Shaw has also assembled an impressive cast in front of the camera, led by Benjamin Hickey ("The Big C"), Olivia Williams ("The Sixth Sense") and Rachel Brosnahan ("House of Cards"). So the series can convince with an exciting story, good actors and above all with an outstanding set design.

Nevertheless, in the first two episodes it is still a little difficult to get to grips with the events. The dialogues are well written and the characters are interestingly drawn. However, the structure of the many different plot strands and the presentation of the numerous characters is a little bit bulky and dry. But it's worth staying on the ball. Because with each episode the tension increases exponentially and the development of the characters and the motivation for their actions are also implemented absolutely stirring.

Besides long dialogues, written and staged in an absolutely gripping way, there are also a lot of nerve-racking moments of tension, which are intensified by the dense atmosphere of the production. The makers manage very well to capture the atmosphere in the small desert town, which is dominated by fear, paranoia and mutual suspicion. That's why even quieter moments, in which dialogues and character development stand in the foreground, are very exciting. Sure, there are still some lengthy scenes and also some predictable clichés. But all in all this first season of "Manh(a)ttan" is extremely exciting, high quality television with high entertainment value. If you like first-class dramas with a historical background, you should definitely buy this box. Worth seeing!

Picture + sound: The picture quality of the Blu-ray is absolutely in keeping with the very authentic 40s look of the series. The colour scheme accentuates the equipment very well, whereby the warm shades in particular are pleasantly powerful. The image sharpness is on a very good level and even in the darker scenes there are hardly any visible quality losses. The sound is present in a harmonious 5.1 DTS-HD Master Audio Mix, with some very strong surround moments in addition to the dominant dialogues. Good.

Fazit: "Manh(a)ttan" is a gripping and extremely entertaining series about the origin of the first atomic bomb. The team around series creator Sam Shaw manages very well to revive the paranoia of this era. With first-class equipment and an outstanding set design, they create a gripping microcosm in which the sometimes somewhat complicated story can unfold very well. Excitingly staged and very well played - a must for series fans. The Blu-ray presents the first season in good picture and sound quality and also has some good extras on board. All in all there is a clear one for it: Absolutely recommendable!