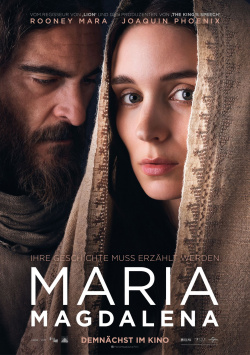 Maria Magdalena (Rooney Mara), who is to be married against her will, is looking for her very own way in life. She seems to have found it when she meets Jesus (Joaquin Phoenix) and sees him perform a miracle. Mary breaks with her family and joins Jesus and his disciples. Together they set out for Jerusalem to proclaim to the people that Jesus is the Messiah they have been waiting for for so long. It is a spiritual, but also dangerous journey, at the end of which Mary Magdalene will take on a very special role - a role that will be denied her for many centuries…

"Mary Magdalene" is the attempt to tell the story of Jesus Christ, his crucifixion and resurrection from a different perspective. It is a film that recognizes Mary Magdalene as part of the disciples around Jesus and also enriches the well-known story with some interesting interpretational aspects. For example, Judas's motivation for betraying Jesus is really a very different, exciting approach to this character from the Bible. In this respect, the work of Garth Davis can certainly be said to have a certain relevance.

The visual language is also really great. The interplay of camera and music creates a pull that is hard to resist. Another aspect in which this biblical film can convince. But now comes the big BUT: The staging is otherwise very cumbersome. The actors act with extremely reduced facial expressions, which in Rooney Mara's case in particular leads her to seemingly wander through the story only with a single facial expression, which is only complemented by a second variation at the last moment by a slight smile. In addition, the dialogues are presented in a deliberately slow manner, so that the last spectator also notices the meaning of every word spoken by Jesus, Mary Magdalene or the other disciples.

However, unfortunately this does not seem strong and significant, but only extremely boring. It's not that Davis should have included more action or even humor to loosen up the whole thing. But this meaningful sluggishness is simply too much of a good thing. Apart from that Joaquin Phoenix seems simply too old as Jesus and he never manages to make his very distinctive personality disappear behind this role.

The intentions of "Maria Magdalena" are important and good, but the realization is too much about the importance of burying every form of entertainment value - and even a bible film should have one - underneath. Despite the interesting discussions that the film can trigger, the bottom line is that there is only one: Worth seeing with clear cutbacks!