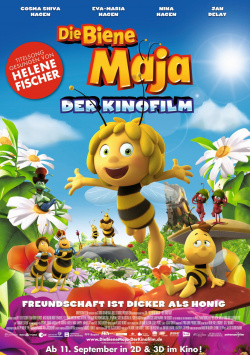 Maya the Bee - The Movie

Maya the Bee flies again! And this time the probably most famous honey bee in the world can even experience its adventures on the big cinema screen - and even in 3D! As soon as Maja has hatched from her honeycomb, she is already causing a lot of hustle and bustle in the well-organized hive. Her thirst for knowledge and her unadapted nature are a thorn in the side of the insidious Gunilla, the queen bee's advisor. Because Gunilla wants to seize the power in the beehive. She stole the vital Royal Jelly from the queen, which the curious bee girl observed. But no one wants to believe Maja and before she knows it, she is driven out of the beehive. Now she has to find a way to save the queen bee together with her best friend Willi and prevent a threatening war between the bees and the hornets. But Maja and Willi have no idea what a great adventure the two bee friends are facing on the large meadow and what dangers await them…

In the 1970s, "Maya the Bee" became the most successful animated series on ZDF. Up to 4 million children followed the adventures of Maja and her friends based on the novels of Waldemar Bonsels. The title song sung by Karel Gott became a big hit, which belongs to the most famous songs of the singer until today. Already in March 2013 ZDF revived the successful series. Instead of Karel Gott, pop star Helene Fischer was now allowed to hum the accompanying catchy tune and the cartoon characters were replaced by CGI characters. That didn't go down well with all the fans, but it was successful enough to bring the series to the cinema now. "Die Biene Maja - Der Film" is a nice cartoon adventure for little ones, which lacks the charm of the original series.

No question, many of the new and redesigned characters are very lovingly realized and the rather simple story was garnished with many nice ideas. That is sometimes very exciting, often funny and sometimes just beautiful. The speakers are all right, even if Jan Delay as Willi never comes close to the great Eberhard Storeck and the cast of Nina Hagen as an evil bee is somewhat unimaginative, because Nina Hagen is always just Nina Hagen and doesn't reveal any mutability. If you look at the animated fairy tale "The 7th Dwarf" after "Maya the Bee", you will understand what it means. But all in all the dubbing of "Maya the Bee - The Movie" can be described as absolutely successful.

The fact that there doesn't seem to be any poppy at all on the gossip poppy meadow doesn't carry as much negative weight as some other biological freedom that the makers have taken here. Because let's be honest: even if we adults may notice it, if we are bored looking for some film mistakes, the children, who are absolutely fascinated by Maja's exciting adventure, don't care. And there is no question that the little cinema fans will be carried away by the film. Alexs Stadermann and his team don't just rely on speed and the usual roller coaster ride effects for this adventure, but also on really successful humour and lots of charm. And even if, as already mentioned, it doesn't come close to the classic series, it makes "Maya the Bee - The Film" a really cute and worth seeing children's film.

Whether the CGI-Maya will be just as cult in 40 years as her drawn predecessor, remains to be seen. But she always provides a fun cinema afternoon with Willi, Flip, Fräulein Kassandra and all her new friends. And therefore applies: for all little bee Maja fans between 4 and 8 and all young at heart companions absolutely worth seeing!