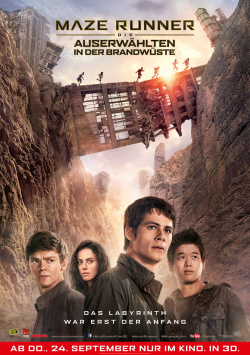 Maze Runner - The Chosen in the Fire Desert

Thomas (Dylan O`Brien), Newt (Thomas Brodie-Sangster), Teresa (Kaya Scodelario) and Minho (Ki Hong Lee) have just escaped the deadly labyrinth, and they have already found out that they are not safe at the WCKD organization either. And they also cannot trust their supposed rescuers, led by the shady Janson (Aiden Gillen). And so Thomas and some others of the chosen ones dare to flee into the dangerous desert of fire. Here they hope to find answers to what has happened to them and the world. A group of resistance fighters around the leader Jorge (Giancarlo Esposito) and the young Brenda (Rosa Salazar) could help them. But are the enemies of WCKD automatically the friends of Thomas and his comrades-in-arms? And are there other survivors who could give them more answers? As the youth try to find out, their followers of WCKD come closer and closer. And they are by far not the only danger waiting for them in the desert of fire...

With "Maze Runner - The Chosen in the Labyrinth", based on the successful novel trilogy by James Dashner, another representative of the currently so popular YA dystopias came to our cinemas last year. Of course the comparison to other Young Adult series like "The Tributes of Panem" or "Divergent - The Destination" is obvious. But even though the story didn't really have anything new to offer, the second half of the filming could score with some good effects and gripping moments of tension. These were primarily due to the labyrinth, which no longer plays a role in the second part. But also the desert with the title Brandwüste offers some good show values and exciting dangers, which let the entertainment value skyrocket in many moments. However, the whole thing was defused in Germany by almost two minutes, which again leaves a disappointing impression. It remains to be hoped that the uncut version will also be available for the later home cinema version.

The sequel is altogether more varied, exciting and spectacular than its predecessor. Nevertheless, part 2 also has to struggle with the same problems: The characters are changing clichés, which cover as many ethnic groups as possible in a politically correct way. The dialogues are frighteningly flat at times and make the actors seem relatively pale despite all efforts. Moreover, the story does not offer any real surprises despite consistent further development. That's simply because Dashner has already quite obviously made use of many other genre representatives in his novels and has hardly brought in any ideas of his own.

However, one should never forget for which target group the books and the film adaptations are intended. And for teenagers aged 13 and over, the merciless escape of the chosen ones through the post-apocalyptic world is a truly gripping adventure with lots of action and a convincing hero, whose secret, however, is not fully revealed in this part either. But there are more and more hints about what happened to Thomas and the others, why they are so important for WCKD and what turned the earth into this deadly fire desert.

Whoever can overlook the many clichés and the cuts and primarily wants to get target-group oriented action and food for the eye, is absolutely right here. And those who already liked part 1 should not miss this successful sequel. For this there is a very clear one: worth seeing!