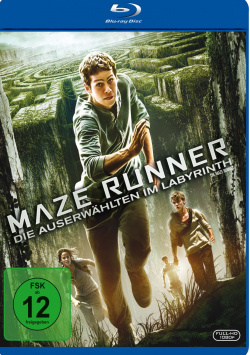 Maze Runner - The Chosen in the Labyrinth - Blu-ray

Film: Without any memory a boy (Dylan O`Brien) wakes up in a clearing surrounded by a group of other boys. Soon he remembers his name Thomas, but everything else remains in the dark. From Alby (Aml Ameen), the leader of the boys, and his number two Newt (Thomas Brodie-Sangster) Thomas learns that he is in the middle of a huge labyrinth from which there seems to be no escape. Day after day so-called runners explore the corridors of the labyrinth. But they have not found a way to freedom in several years. That's why Alby and the others have built up a small society in which each individual has an important task to fulfil and has to abide by some rules. The most important thing is: never go into the labyrinth on your own. Thomas finds it very difficult to simply accept all this. When suddenly a girl (Kaya Scodelario) appears in the clearing Thomas seems to know, the events take a dramatic turn...

"Maze Runner - The Chosen in the Labyrinth" is based on the successful novel trilogy by James Dashner. Of course the comparison to other Young Adult series like "The Tributes of Panem" or "Divergent - The Destination" is obvious. Dashner's books were also compared with the classic "Lord of the Flies" and the cult TV series "Lost". But even though all these associations are quite justified, one has to admit to the novel and its film adaptation of director-newcomer Wes Ball that the story goes its own way in a very pleasant way. For example, the almost obligatory love story for this genre is dispensed with. Also there are no young heroes with very special powers here. The protagonists are normal boys who have to assert themselves in an extreme situation and build a new kind of functioning society by their own efforts. And that makes the whole thing very exciting and interesting despite many well-known components.

However, the distribution of roles is somewhat clichéd. The first time the camera travels through the ranks of the "Chosen in the Labyrinth", the viewer already knows who the leader is, who the adversary for our hero will be, who the lovable fool will be, who will faithfully support Thomas and who will simply fall victim to the dark mysteries of the labyrinth as an extra. And also dramaturgically, subtlety isn't really the movie's biggest strength. There are dialogue sequences, for example, in which you certainly have the feeling that you can have a say. Also the meanwhile almost involuntarily funny "Tell my parents that I love them" - "You'll tell them that yourself" must not be missing.

Despite many clichés and a certain predictability, "Maze Runner - The Chosen in the Labyrinth" is very exciting and atmospherically staged. The scenes inside the labyrinth even manage to create some goose bumps, especially with younger viewers. What awaits the boys there, of course, should not be revealed at this point. But let's say this much: even if the logic is not always so precise here, the special effects, the camera work and also the very good sound design ensure a high level of tension, which can be kept at a decent level until the open end.

In recent years there have been repeated attempts to link the success of "Harry Potter", "Twilight" or "Panem" with film adaptations of book series from the Young Adult sector. Many of these attempts failed, which is especially annoying when the viewer isn't presented with a completed story. Even with "Maze Runner - The Chosen in the Labyrinth" this would be a big shortcoming, but it is already certain that there will be at least a second part, which will be shown in the cinemas this late summer. Wes Ball's feature film debut is by no means perfect, but for what the film wants to be, the Hollywood newcomer has really done a good job. Convincing young actors, an atmospherically dense staging and neat effects clearly prevail over the somewhat too clichéd script and make sure that at the end there is a quite positive overall impression. Therefore: for lovers of dark dystopias, who are primarily directed at a young target audience, absolutely worth seeing!

Picture + sound: As was to be expected, the technical implementation of "Maze Runner" for the Blu-Ray release can be convincing in almost every respect. The picture is crystal clear and therefore has an enormous richness of detail. The colour scheme is harmonious and the black values are almost perfectly matched. Whether in the bright or the darker shots, there is really hardly anything recognizable about the image quality. The same applies to the sound, which has a wide range of effects to offer. From smaller sounds discreetly integrated into the action to big, massive sound effects, the viewer gets something thrown around his ears from all channels again and again. Very good!

Extras: When it comes to bonus material, the Blu-ray is also very convincing. In contrast to the leanly equipped DVD, the Blu-ray has lots of extras worth seeing and hearing. It starts with a very informative audio commentary by director Wes Ball and his screenwriter T.S. Nowlin. The two of them talk lively about the adaptation, the shooting, the effects and other aspects of the creation of the film. You can clearly see how much enthusiasm Ball has shown in approaching his first feature film direction.

New scenes (approx. 18:31 min.), which are presented with partly unfinished effects and an optional commentary by the director. These are primarily character moments, that don't have a big influence on the dramaturgy, but sometimes offer some interesting moments. Here follow 5 featurettes, which together offer a good overview of "The making of the film" (ca. 42:29 min.). The way from the book to the film, the actors, the shooting, the set and the digital effects are described in more detail. Altogether an absolutely worth seeing Making of.

If you want to learn more about the visual effects, you can look at some examples as splitscreen with optional comment of the director (ca. 30:19 min.). There is also a featurette about casting the role of Chuck (ca. 5:29 min.), a picture gallery, the trailer and some amusing outtakes (ca. 6:43 min.).

One of the most interesting extras is the animated short film "Ruin" (ca. 8:29 min.), which not only reveals Wes Ball's preference for dystopic fabrics, but also his talent for visual effects. The very worth seeing short film is also equipped with optional audio commentary. All in all, there is a clear bonus package for this: Very good!

Fazit: "Maze Runner - The Chosen in the Labyrinth" is a successful prelude to the filming of James Dashner's successful novel trilogy. Even if the adaptation of the first part shows some dramaturgical weaknesses, it can still be convincing atmospherically and visually. On the Blu-ray the cinema success is presented in very good picture and sound quality and also has a lot of worth seeing extras on board. Recommended