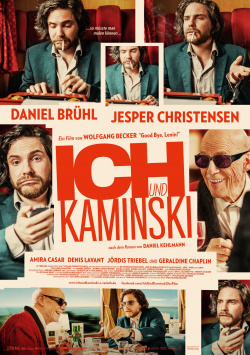 Art journalist Sebastian Zöllner (Daniel Brühl) is not really interested in art. Basically, he's not interested in anything but himself. Writing a successful book would pet his oversized ego pleasantly. And what could attract more attention in the art scene than a biography of the painter Manuel Kaminski. Although many have forgotten him, the pupil of Matisse and friend of Picasso is considered one of the last great representatives of Classical Modernism. Zöllner wants to visit the old man in his remote home in the Alps and find out why he is hiding from the public and whether he really is blind. If he could expose him as a charlatan, he'd have a bestseller. But it proves to be extremely difficult to get close to Kaminski. And all he manages to do with bribery and cunning, he has to realize that the old man has grown with all his might and even a Sebastian Zöllner is not really up to him...

Twelve years after the great success of "Good Bye, Lenin!" director Wolfgang Becker and lead actor Daniel Brühl have joined forces again. In the film version of Daniel Kehlmann's novel "Ich und Kaminski" they prove after only a few minutes that they are still a real dream team. A visually wonderful staging, enriched with a lot of ironic humour and biting dialogues, in connection with Daniel Brühl's wonderfully self-in love game, simply makes you in a good mood right from the start. When the world of fine arts is deconstructed with extremely satirical side blows, the fun is perfect. It's always nice when laughter muscles and intellect are used equally - and that's clearly the case here.

In the second half, the film turns into a classic road movie in which Brühl and the great Jesper Christensen skillfully pass the balls to each other. Becker directs the two with absolute precision through the mutual manipulations that lead to a surprising outcome. What is truth, what is lie, what is art and what is glare, what is blindness and what is repression? Even though there are some tough moments in the last third of the movie, the story with its different facets is strong enough to keep the viewer in a good mood. The fact that the bite, which makes the character of Sebastian Zöllner so wonderfully disgusting at the beginning, diminishes a little towards the end, is a pity on the one hand, but on the other hand also consistent.

In the end one is inclined to be a little disappointed because of the extremely strong beginning. But on closer examination, the ending is absolutely fitting for the story. The dramaturgical arc, the development of the characters and the relationship between the cynical art critic and the deceitful artist result in an absolutely coherent overall picture that quickly makes minor weaknesses forgotten. Wolfgang Becker has succeeded in creating a very subtle comedy, which can be warmly recommended to lovers of German-language arthouse comedies thanks to its light-footed, yet also profound staging, the good-humoured actors and the great visual realization, especially - but not exclusively - lovers of German-language comedies. Absolutely worth seeing!