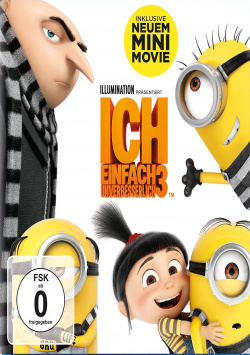 Film: Ex-villain Gru (spoken by Oliver Rohrbeck) and his wife Lucy (Martina Hill) have made it: They both work for the Anti-Virus League and raise their three adoptive daughters Margo, Edith and Agnes together. The perfect life, actually. But then Gru screws up an operation against the villain Balthazar Bratt, a former TV child star. And that means he and Lucy lose their jobs. Now of all times Gru learns that he has a twin brother who has been looking for him for a long time. Dru wants to convince his brother that they should continue the family heritage together and work as super villains. But Gru doesn't want to know. Only when Balthazar Bratt reappears to implement his crazy master plan does Gru realise that he urgently needs help to stop this villain…

Seven years ago Chris Renaud and Pierre Coffin delivered one of the biggest surprise hits of 2010 with "Ich - Einfach unverbesserlich" (I - Simply incorrigible). The animation adventure around a super villain, who discovers his heart through three little girls, thrilled with his mixture of biting and sometimes amazingly subversive humor, lovable characters, a lot of heart - and with the Minions. Gru's yellow assistants quickly became the real stars of the film, who soon conquered the Internet and the children's rooms and even got their own film after the "I - Simply Incorrigible" sequel. After Grus' second appearance had earned over 900 million dollars and the Minions had even cracked the billion mark with their solo work, it was clear that this success story would be extended by further chapters.

And so Gru, the girls and the Minions can now experience an adventure full of wit and weird ideas together for the third time. Especially in the first minutes, in which there is a wonderfully evil allusion to "Finding Nemo", you get the feeling that the formula for success was well varied and still works perfectly. But it soon becomes clear that this is only the case to a limited extent. No question about it, the film is funny and the Minions in particular, despite their permanent presence in toy shops and supermarkets, still make for really good laughs. Nevertheless, the whole thing doesn't feel as fresh and unadapted as it did in the first part. The humor is much more direct and no longer as subversive as it was with its predecessors. And slowly the charm of the three adoptive daughters wears off a little.

The team around Pierre Coffin and his co-director Kyle Balda is too attached to the proven success formula for the third infusion. Sure, that still works and especially with younger spectators the fun factor quickly rises. Nevertheless, it would have been good for the movie if it had left the safe paths here and there, in order to not only offer guaranteed laughs, but also some surprise moments. Because it would be a shame if this series were to wear off at some point, as is the case with the "Ice Age" films, which are now almost just annoying. Neither Gru nor the Minions deserved that.

The German dubbing of part 3 has been very successful again over long stretches, which is primarily due to Oliver Rohrbeck, who this time can lend two characters his unmistakable voice. There's not really much to criticize about this movie. Nevertheless, there is a lack of enthusiasm after the first two parts, because nothing new is offered. But an amusing second helping of what you liked the first time is not wrong! In the hope of a more original fourth part for "Ich - Einfach unveresserlich 3" there is a very clear one: Banana… umhmmm… absolutely worth seeing!

Picture + sound: As was to be expected, the picture quality of the Blu-ray is excellent. The sharpness of the details is very good, the colours powerful and the image depth more than satisfactory even in the 2D version. You really don't find anything wrong here. The German DTS:X-Mix convinces with full basses, great surround effects and well tuned dialogues. All in all, there's an even 1 for that!

Fazit: "I - Simply Incorrigible 3" has flushed over 1 billion dollars into cinema box offices worldwide. So it should be clear that this will not be the last adventure of Gru and his Minions. But Pierre Coffin and his team should show a bit more originality in the next movie, as many gags are repeating themselves and the whole style of the movies is slowly worn out. Nevertheless still an entertaining animation fun, which is presented on the Blu-ray in very good picture and sound quality. Some extras are quite nice, but for the most part they are typical promo filling material. If you liked the first movies, you still can't get past this disc!