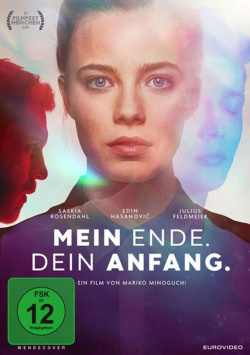 My End. Your Beginning - DVD

Film: Do you believe in love at first sight? For Nora (Saskia Rosendahl) and Aron (Julius Feldmeier) it is clear: It exists. Because the two have experienced it themselves when they meet one day in the subway. For Nora a nice coincidence, for Aron it was clearly predestined. But in any case it is wonderful. The two experience a short period of absolute happiness together. Then Aron is killed. And Nora's life is destroyed. How can she go on without her great love. She walks through the world as if she were stunned and only Natan (Edin Hasanović), whom she meets again and again by chance, succeeds in freeing her from this trance. He gives her support and hope. Hope that everything will be okay again. But she has no idea what a tragic secret really connects her with Natan.

"My end. Dein Anfang", the directing debut of Mariko Minoguchi, tells a very conventional story about coincidence and fate, which gets a special charm by a nested narrative style. However, much more could have been gained from it - especially on an emotional level. Here, the young filmmaker tries too hard to avoid any form of Hollywood kitsch, which eventually leads to the production seeming too undercooled at important points. This doesn't only create some small lengths. It also makes it difficult for the audience to get fully involved on an emotional level with the story and its characters.

This brings a dramaturgical weakness more to the fore. Despite the fact that the story is told on different time levels, it is clear to everyone what secret Natan is carrying around with him, which wouldn't be too bad if you were completely caught up in the story. But long, sad glances or moments of quiet tragedy just aren't enough to bring out the full potential here.

The actors are great, the visual language engaging, the editing excellent and the music very atmospheric. So "My End" works. Your beginning" on many levels really very good. But unfortunately it is also true here: Just over is also missed. That's why the well-deserved "worth seeing" is only available with a few restrictions.

Picture + sound: Colouring and contrast adjustment of the DVD capture the atmospheric pictures of the film very well. The picture sharpness is on a good level overall and only shows small weaknesses in detail in darker scenes. The sound is available as a Dolby Digital 5.1 mix, which clearly puts the dialogues and music in the foreground. Every now and then, ambient noise and small sound effects make the surround channels audible. Good!

Extras: As a bonus, the DVD offers an approximately 11-minute making of, which consists primarily of interviews with the director and the actors.</Conclusion: "My end. Dein Anfang" tells a dramatic love story on various interlocking plot levels, which is supported by strong actors and an engaging visual language. A few lengths and a somewhat undercooled narrative style weaken the otherwise very positive overall impression a bit. The DVD presents the movie in a coherent picture and sound quality, as an extra there is a short making of. All in all, a neat and tidy one applies to this DVD: Recommendable!</p>