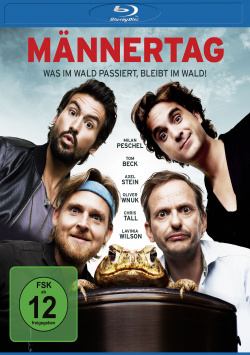 Film: Shock for former school friends Stevie (Milan Peschel), Chris (Tom Beck), Peter (Oliver Wnuk) and Klaus-Maria (Axel Stein): Your buddy Dieter is dead. Even if they have not seen him for many years, the four are affected and therefore agree with his last will: Together, they are to take a trip on Dieter's beer bike to the place that was so important to them in their youth and scatter their ashes there. Together with Stevie's son Paul (Chris Tall) and Andrea (Lavinia Wilson), the alleged girlfriend of actor Chris, they set off on a fun men's excursion. But what is supposed to be a humid and happy tour in memory of Dieter threatens to end in chaos at the latest when the friends meet their former rival Andi Mauz (Hannes Jaenicke)…

"Männertag" is a well cast comedy that follows similar paths as "Hangover" and its various clones. Thanks to the good-humored actors, the rather surprisingly poor story is quite fun at times. Unfortunately, the script lacks the sensitive touch that would have been necessary to make not only the rough jokes work, but also the more serious moments. A good example is the secret that Peter carries around with him (and that the viewer can see through very early). The resolution is then extremely clumsy, whereby this figure degenerates into a cheap punch line consisting only of clichés. And that's just unnecessary.

It's also a pity that good jokes are screwed up by the fact that they are presented completely exaggerated. The way Chris tries to quench his addiction on a Dixi toilet, for example, is simply not funny, but simply stupid. Such scenes are supposed to be funny by shocking. This may have worked at some point, but now this fecal-soaked stylistic device is simply too worn out to generate more than a tired smile. It's a pity that director Holger Haase ("There's still something going on!") acted like this with the wooden hammer instead of developing the characters in an interesting way and creating really funny situations.

Thus it should be clear that this film is not for people who like to have their humor served a little more subtly. If, on the other hand, you like it a bit more solid, you could have a lot of fun here. Because despite the mentioned weaknesses there are some really nice jokes and also some dramaturgically quite nice moments. Thus, the comedy falls short of its possibilities at the end of the day, as it offers enough entertainment value to friends of merry men's evenings and coarse scorners, in order to be certified as "worth seeing" at the end.

Picture + sound: The Blu-ray image pleases with a strong coloration and a good overall sharpness. In some moments, the visual implementation also has a pleasant image depth, which is supported by the harmonious contrasts. The sound is well mixed, primarily determined by the dialogues and the soundtrack. But in the last act there are also some good sound effects, which provide some movement in the multichannel area. Good.

Extras: As a bonus, the disc offers a 3-minute look at the shooting, as well as some promo interviews with the actors. A total of almost 10 minutes of extras, which is unfortunately very weak for a current cinema production.

Fazit: "Men's Day" with its good-humoured cast can comfort many a lowered gag. Nevertheless, the comedy can unfortunately only make limited use of its potential. After all, there are a few good laughs and some nice ideas that show that the makers have the heart in the right place and that the whole thing is based on a really charming idea. The Blu-ray is technically well implemented, the bonus material is unfortunately very scarce. Altogether there is still a good one for friends of the somewhat deeper laid humor: Recommendable!