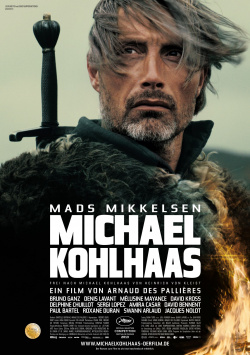 The novella "Michael Kohlhaas" by Heinrich von Kleist published in 1810 is not exactly an easy piece of literature. Several attempts have already been made, such as Volker Schlöndorff's 1969, to translate the material into an adequate film language. Now the French director Arnaud des Pallières has also tried his hand at the classic, with the active support of a great cast of actors.

The story of the Pallières has moved from Brandenburg and Saxony to the French region of Cévennen. There the horse dealer Michael Kohlhaas (Mads Mikkelsen) leads a modest but happy life with his wife Judith (Delphie Chuillot) and his daughter Lisbeth (Mélusine Mayance). When one day his way to the next market is blocked without any legal basis, Kohlhaas is forced to leave two of his horses as a pledge with the administrator of the new baron until he has organised a pass. When he wants to release the horses, he has to realize that they are completely emaciated and maltreated by hard field work. When his lawsuit remains unsuccessful after compensation, Judith tries to ask the princess for justice. But the woman is so badly hurt by the henchmen of the princess that she dies a short time later in the arms of her husband. Shaken by tragic loss and anger against injustice, Kohlhaas decides to take the law into his own hands. Together with his followers and some rebels he starts a campaign against those he blames for the death of his wife…

This French version of "Michael Kohlhaas" lives on two things: the great visual language and a first-class cast. This is led by Mads Mikkelsen sovereignly. Once again the mime proves to be one of the greats of his guild, whereby his playing never overshadows that of the great supporting actors such as David Kross ("The Reader"), Bruno Ganz ("The Downfall") or David Bennent ("The Tin Drum") and thus reduces its intensity. High acting art, embedded in images of a fascinatingly dull beauty, makes the literary filming in these aspects a cinematic pleasure.

The staging of Arnaud des Pallières, on the other hand, more than does justice to the original in its seriousness. In many moments the whole thing seems very artificial and bulky due to the taciturnity of the characters, which makes an emotional approach extremely difficult for the viewer. In addition, there are also developments in action that can only be followed if the story is already known to you. Of course, a movie doesn't always have to chew everything out for its viewers and explain everything in detail. But here the director has exaggerated a bit with his reduction of dialogues. Thus, the viewer is repeatedly challenged to the effect that his attention, built up by the acting expression and great pictures, doesn't turn into yawning boredom.

In order to appreciate this adaptation of "Michael Kohlhaas" as the work of art that the director wanted to create with his high ambitions, you should definitely have a weakness for such a powerful and taciturn program cinema fare, which is emotionally a little bit undercooled. Not an easy feel-good cinema, but worth seeing for Kleist lovers and friends of European art film just because of the great actors!