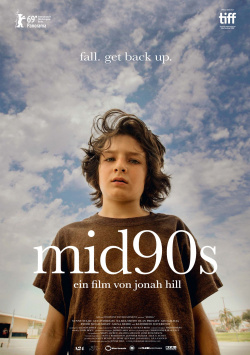 L.A. in the 90s: The silent Stevie (Sunny Suljic) is 13 years old and doesn't only have to struggle with the usual teenage problems. Especially under his aggressive brother (Lucas Hedges) the boy has to suffer again and again. So he flees again and again into the world of video games and music. But then he observes the guys of a local skate shop and discovers a new passion: hanging out with the cool guys, skating with them in forbidden places and going to parties - this gives his life a whole new meaning. Through his new friends, he manages to free himself from the oppressive grip of his single mother (Katherine Waterston) and confront the attacks of his brother. But soon he has to realize that even in this beautiful new world not all that glitters is gold…

"Mid90s" is the directorial debut of actor Jonah Hill. Hill uses the film to make a declaration of love to Los Angeles, where he himself grew up in the 90s. To make it as authentic as possible, the nostalgic journey through time was shot on 16mm and underlaid with the appropriate soundtrack. And the professional cats Na-Kel Smith and Olan Prenatt make sure that also the skater scene is presented credibly. It can be seen at every second that the film is an absolute passion project, in which Jonah Hill as director and author reveals a lot about himself.

For viewers who grew up under similar circumstances during this time, there are an incredible number of points of reference. But is this also worth seeing for other viewers? No question about it, the implementation is charming, the actors are very good and the mixture between comedy and drama works very well for long stretches. However, some scenes seem very insignificant if you as the viewer have no connection to them. The young people's conversations always revolve around the same topics, presented in a language that may be authentic, but which in the long run is also a bit annoying.

"Mid90s" is ambitious, likeable, sometimes very funny, then moving again. But the movie also has some lengths despite its short running time, as well as some somewhat exhausting moments. All in all not a masterpiece, but especially for children of the 90s a time travel worth seeing, which is not marked by transfigured nostalgia. Worth seeing!