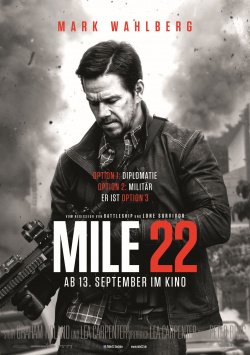 James Silva (Mark Wahlberg) is head of a secret elite unit that is used whenever diplomacy fails. When a large amount of radioactive material disappears, the mysterious spy Li Noor (Iko Uwais) seems to be the only one who can prevent it from leading to a worldwide catastrophe. He proposes a deal to the US government, but must be brought to America from the US embassy in Southeast Asia. The way from the embassy to the plane that can take him out of the country is not far, but paved by people who want to prevent the deal from happening. Silva and his team are supposed to offer Li Noor protection on the 22 miles, but there is only little time for that - and from mile to mile the team gets smaller…

Peter Berg seems not to be able to go on without Mark Wahlberg. "Mile 22" is already the fourth film in a row that the director has directed together with Wahlberg - and the next one is already in progress. Again the duo delivers a lot of explosive action and also a little tension, whereby Berg Wahlberg's character this time missed some ticks - the constant flicking on a rubber band, for example, or extremely fast speaking - which could quickly get on the viewer's nerves. So it's a good thing that this time with "The Raid"-star Iko Uwais an actor was assigned to his side, who makes every weakness in the script and the staging forgotten for a short time with his fighting interludes.

The real-time chase from the US embassy to the plane is really fast and gripping. The fact that the rest, on the other hand, is rather weak in average and can't score with good dialogues, nor with really convincing actors, is almost bearable. Berg hardly leaves the viewer any time to get angry about clichéd word battles or deep logic holes. The action is simply too good and staged too fast for that.

However, there are also scenes that have to get by without shootings, combat choreographies, chases and explosions. And in such moments the film reveals that it doesn't have much more to offer than the usual play with stereotypes. Thus, the work cannot be certified to be convincing overall. Purely for the action there is clearly "worth seeing", but all in all "Mile 22" isn't more than a decent average - with some slips down.