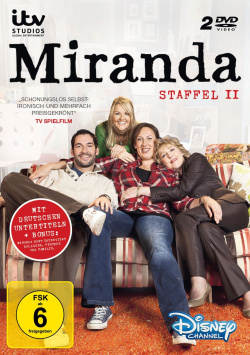 Film: Miranda (Miranda Hart) is frustrated. Since her secret love Gary (Tom Ellis) has gone to Hong Kong, she spends most of her time in her small apartment and only has occasional conversations with her fruit friends. But her best friend Stevie Sutton (Sarah Hadland) no longer wants to watch Miranda let herself go. She talks into her conscience and soon Miranda finally takes off her pyjamas and throws herself back into life. To forget Gary, she even thinks about a new love affair. Who could be better than Gary's successor in the bar, the attractive American Danny (Michael Landes), who actually seems to have taken a liking to the chaos queen. But luck does not hold Miranda for long. Not only does her student friend Tilly (Sally Phillips) use every opportunity to rub her nose in again, which is a great life she leads, while Miranda only runs a joke shop. Mother Penny (Patricia Hedge) also robs her of her last nerve when she wants to move in with her daughter after another fight with Miranda's father. And to make the chaos perfect, Gary suddenly stands before Miranda again and finally seems to be ready for a relationship...

The comedy series "Miranda" is written by the comedian Miranda Hart perfectly on her striking body. With pieces from her semi-autobiographical radio comedy "Miranda Hart`s Joke Shop" and lots of self-irony, Hart has quickly won the favor of audiences not only in her home country. However, her completely relentless handling of classic slapstick and cheerful fat-jumping also makes it almost impossible not to take the 1.85 metre woman to her heart. Season 2 of the series, which recently ended after 3 seasons and two specials, clearly follows the concept of the first season. If you expect big surprises or distinctive further development of characters and story, you might be disappointed. But if you just can't get enough of Miranda Hart's very own style, you'll be able to enjoy the new episodes deliciously again.

There are many running gags from the first season, which will be picked up again here. Thus Miranda's mother still adds "what I call it" to all common terms, and Miranda does not let herself go without looking directly into the camera again and again or making comments to the audience. One might think that these two really often used stylistic devices would wear off slowly. But the strange remarks of Miranda's mother and the direct interaction with the audience often make for the most amusing moments of the season.

What makes the new episodes really worth seeing is the storyline about Miranda and Gary's attempt to start a relationship or at least have sex, which encompasses the entire season. Who knows Miranda, will not be surprised that thereby everything goes wrong what can only go wrong. Sure, that's often completely exaggerated, mostly uninhibitedly silly and not really profound. But the charming actors and the many successful gags make sure that at least for all fans of season 1 and for all lovers of weird Britcoms applies: Absolutely worth seeing!

Picture + Sound: Compared to the first season nothing has changed here at all. Again, the technical implementation is on a good level for a TV comedy series. The image is clean, the colours powerful and the sharpness absolutely satisfactory. The stereo sound, which transports the funny dialogues powerfully from the loudspeakers, is also perfectly sufficient for a sitcom. The bottom line is clear: Good!

Extras: In Great Britain viewers could press a red button after every episode of the second season or go online to watch an amusing interview. These six "Red Button Interviews" (ca. 42:49 min.) made it to the DVD. Because alone the conversation between Miranda Hart, her serial mother and her real mother is simply wonderful. Also the first interview between Miranda and the whole cast is absolutely worth seeing for fans!

Fazit: "Miranda" doesn't offer any big surprises in the second season. The running gags remain largely the same and neither the story nor the characters really develop noticeably. Nevertheless, the comedy series with its very special humor and the wonderfully self-ironic main actress still works really well even at the second attempt. On the DVD the episodes of the second season are presented in good picture and sound quality and bonus material in the form of entertaining interviews is also available this time. If you already liked the first season, you can't miss this double DVD. Recommended