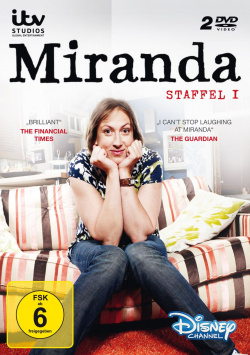 Film: Miranda (Miranda Hart) as a 1,85m tall woman has it not really easy. Again and again she is addressed as "Sir", her boarding school friend Tilly (Sally Phillips) tells her at every opportunity how much better and more successful her life is and her mother Penny (Patricia Hedge) doesn't miss any embarrassing attempt to set Miranda up with a potential son-in-law. And then there's Gary (Tom Ellis), for whom the owner of a joke shop has been raving about for quite some time. But whenever she even makes a small attempt to make advances to him, she steps from one fat face to the next. Only her childhood friend Stevie Sutton (Sarah Hadland) stands by her faithfully with advice and action - or at least tries it. Because when Miranda stumbles from one embarrassing situation to the next, even the best advice can't really prevent the chaos she leaves behind...

"Miranda" is a British comedy series that comedian Miranda Hart has written herself. Based on the semi-autobiographical radio comedy "Miranda Hart`s Joke Shop", a pilot episode was first staged, but it was so well received that a complete season was commissioned. The success of the series is not only due to the delicious mixture of slapstick and wordplay. Hart's self-ironic play and her direct interaction with the audience also make the series so amusing. So every episode begins with a monologue that addresses the audience directly. But also in the further course of each episode, she repeatedly breaks through the "fourth wall" by, for example, directly negating something she tells her counterpart by looking towards the viewer and shaking her head.

Strictly speaking, the series consists only of constantly repeating running gags, which, however, are repeatedly incorporated into new, abstruse everyday situations and therefore always work well. Even the wonderfully exaggerated characters like the always politically incorrect mother Penny make this weird series stand out from the crowd of British sitcoms. Even though some of the gags are difficult to translate into German, the German dubbing was very successful overall. But if you have a good command of English (which is absolutely necessary due to the lack of subtitle options), you should still choose the original version, because only here can the wonderful dialogues unfold their full wit.

Subtle humor is not on the program here. You should have a penchant for silly slapstick and typical British humour to laugh at the chaos queen "Miranda". But then the series is so much fun that it's almost impossible not to want to watch all the episodes of the first season at once. And that's why the series - "as I call it" - is also: Absolutely worth seeing!

Picture + sound: Picture and sound of the DVD are on a good level for a TV comedy series. The image is clean, the colours are harmonious and the sharpness is absolutely satisfactory. And even the stereo sound is perfectly sufficient for a sitcom. This is of course not an audiovisual revelation, but it fulfils its purpose in every respect. And for that there is a clear one: Gut!

Extras: Unfortunately the first season has no bonus material to offer.

Fazit: "Miranda" is British comedy at its best. When the 1.85m tall title heroine, who is often referred to as "Sir", kicks from one fat little cup to the next in her efforts to win the heart of her adored Gary and has to struggle with her eccentric mother at the same time, then not least because of Miranda Hart's self-ironic play no eye remains dry. The DVD box of the first season offers all six episodes in good picture and sound quality, the only bonus material viewers have to do without. Nevertheless: For all fans of British comedy food absolutely recommendable!