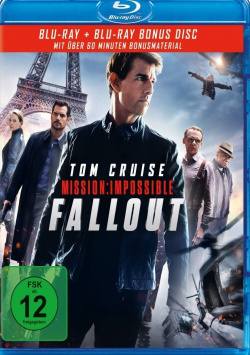 Film: Ethan Hunt (Tom Cruise) goes on another impossible mission. After he and his team screw up the handover of weapons-grade plutonium offered on the black market, which they are supposed to secure, they now have little time to prevent the plutonium from falling into the wrong hands. Together with the CIA agent August Walker (Henry Cavill) Ethan, Benji (Simon Pegg) and Luther (Ving Rhames) set out to get back the dangerous true, which is now in the possession of the mysterious White Widow (Vanessa Kirby). In order not to let Ethan's camouflage blow up, he is faced with a very special challenge: He is supposed to help his arch-enemy Solomon Lane (Sean Harris) to escape…
"Mission: Impossible - Fallout" is action cinema at its best. Of course, the plot only plays the supporting role. But let's be honest: is it really supposed to be different? Who wants to see a completely brain-bound "Mission: Impossible" movie with less action? Now, of course, it can be argued that there are action movies like Sand at the Sea and that therefore a sixth part of the franchise is completely unnecessary. However, this argument can be quickly refuted. Because nowadays a film like "Mission: Impossible - Fallout" is a real rarity. This is because relatively few CGI effects have been used here. Because Tom Cruise doesn't let himself get away with doing all his stunts himself, even when he's in his mid 50s. There he simply learns to fly a helicopter for a year and a half so that he doesn't have to shoot a spectacular air chase in front of a green screen. And there he bravely continues to hobble when he breaks his ankle during a daring jump.
That the action feels "real" makes the movie so well done. A brawl on a toilet alone is so brilliantly choreographed and executed, that the viewer likes to ignore it when the laws of logic are temporarily overridden. But the movie isn't carried by the action alone. The story itself might be quite thin, but it's also quite thrilling and stirringly implemented. And then there are of course the characters, who are so mature in the meantime, that you're just happy to see them again. This applies not only to Ethan, Benji and Luther, but also to Isla Faust in this film. Rebecca Ferguson returns from her successful debut in Part 5 and proves that she is a perfect addition to the team - even though this time she seems to be working for the other side.   Many scenes may be a bit thick and especially the grand finale may be a little bit too much of a good thing - especially since every viewer should know how the whole thing will end. Yet, this doesn't change anything at all about the extremely high entertainment value of the movie. With breathtaking action, lots of suspense and a good portion of humour, "Mission: Impossible - Fallout" is the best popcorn cinema that really doesn't let you get bored for a second. And even if the end is a round ending, a reunion with Ethan Hunt and his team can't come fast enough after this successful mission. Absolutely worth seeing!

Picture + sound: Technically, Blu-Ray is at a very high level. The image is clean and has excellent detail sharpness. The colours are very well matched and also the contrasts are on a very good level. And where the picture already convinces, the sound never disappoints. In addition to the well mixed dialogues and the harmonious film music, the numerous sound effects, which are really effective in the 5.1 Surround Mix, make the home cinema system shake a lot. Very good.

Extras: The 2-Disc Set offers interested viewers lots of extras. The movie disc starts with no less than three audio comments, all with optional subtitles. Comment 1 was recorded by director Christopher McQuarrie together with Tom Cruise. The fact that the two have also become friends in the course of their multiple collaborations makes for a pleasantly relaxed atmosphere, in which the two reveal some interesting details about the making of the movie. Comment 2 unites McQuarrie with his editor Eddie Hamilton. A rather technical, but sometimes also very worth hearing commentary. Finally, the third audio commentary is by composer Lorne Balfe, who concentrates in his remarks on the creation of the musical background. On the second disc fans get to see a worth seeing, multi-part Making of (approx. 53:32 min.), which especially deals with the shooting locations and the stunts, but also with the development of the series. The creation of a spectacular scene is also shown here, but in the end it was edited and can now be seen in the bonus material in a compilation of unpublished material (approx. 3:41 min.). An optional audio commentary from the director can be added to this extra. We continue with a look at the great chase in which Lorne Balfe analyses the accompanying film music. A short promo clip (approx. 2:51 min.) as well as storyboards to selected scenes round off the good bonus material.

Fazit: "Mission: Impossible - Fallout" is the most successful and also one of the best parts of the series so far with almost 800 million dollars in box-office takings. The film skilfully takes up loose threads of the predecessors and leads them to a round ending, which at the same time makes you want more. The Blu-ray presents the film in very good picture and sound quality and also has a few extras worth seeing and hearing on board. absolutely recommendable!