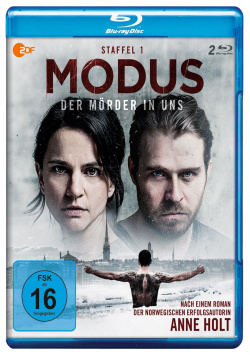 Movie: Christmas time is not a time for reflection. Sweden, of all places, is haunted by some mysterious deaths during the atmospheric pre-Christmas period, which Commissioner Ingvar Nyman (Henrik Norlén) and his team are trying to solve. When the autistic daughter of Inger Johanne Vik (Melinda Kinnaman) witnesses a murder and is thus targeted by the perpetrator, the former profiler joins the investigation team. Even if the deaths seem to have little in common at first glance, it quickly becomes clear to them that they are interrelated. While the policemen desperately search for a connecting pattern, another murder takes place. And slowly the connection becomes apparent. But what's really behind the murders, that Vik and Nyman can't imagine in their worst nightmares…

"Modus - Der Mörder in uns" is a thrilling mixture of thriller and drama, which is told a little bit tenacious at the beginning. Although there are already some very well done moments of tension in the first two episodes and the threatening mood can be established well, there are also a lot of leisurely staged moments that noticeably interrupt the build-up of tension. Moreover, it is difficult at the beginning to find an access to the main characters Ingvar and Inger Johanne. But the more the puzzle is put together to form a coherent overall picture, the more rousing the series becomes.

Whoever holds out for the first three hours (which shouldn't be a problem because of the many successful moments) gets a cleverly constructed crime thriller in the second half of the mini-series, which creates a conspiracy scenario, which at first glance seems to be very thick. But it is actually enough to read through a few hate comments on certain topics on the Internet to understand that what is pure fiction here does not seem so far removed from possible reality. And that makes the dissolution of this story all the more shocking and effective.

Although "Modus - Der Mörder in uns" doesn't exhaust all its possibilities and doesn't belong to the big highlights of the nordic thriller food of the last years, the series offers six hours of really good, atmospherically densely staged and solidly played entertainment, which deserves a clear "worth seeing" despite some lengths.

Picture + sound: The technical implementation of the series is on a good to very good TV level. The image is absolutely clean and the overall sharpness is absolutely satisfactory, especially for brighter outdoor shots. The color scheme is very atmospheric and even in the darker scenes there are hardly any qualitative point deductions. The DTS-HD Master Audio 5.1 Mix is a great way to bring out the dialogue as well as the atmospheric soundtrack. Not really spectacular, but absolutely appropriate for a crime series. Good.

Extras: In addition to an extensive booklet, the box on the second disc has short promotional interview sequences (approx. 3 minutes) to offer.

Fazit: "Modus - Der Mörder in uns" is an exciting thriller drama, which is, however, told very leisurely especially in the first two episodes. The atmospheric imagery and the tension screw that clearly tightens towards the end make smaller lengths quickly forgotten. Those who like Nordic thriller food will get their money's worth here. The Blu-ray presents the whole thing in good picture and sound quality. The bonus material, on the other hand, is somewhat poor. Nevertheless there is a clear one at the end: Recommended!