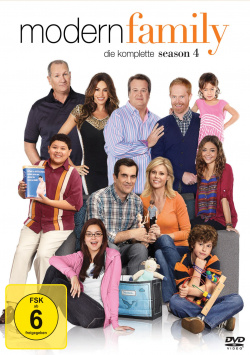 Content: The characters indicate changes for the "Modern Family": On his 65th birthday of all days, head of the family Jay (Ed O`Neill) learns that he will become a father again. At his age it is certainly not an easy challenge, especially as his hot-blooded Colombian wife Gloria (Sofia Vergara) can't handle the circumstances of a pregnancy very well. Not only Jay, but Gloria's son Manny (Rico Rodriguez) also suffers more than once from her emotional swings, loud snoring and refusal to wear proper maternity clothes...

Jay's gay son Mitchell (Jesse Tyler Ferguson) and his partner Cameron (Eric Stonestreet) have other problems after their plans to adopt a second child have failed. They both don't deal very well with this news - and their little daughter exploits the situation mercilessly. But that's not all: Mitchell is desperately looking for a new challenge for Cam. But he just doesn't want to be patronized. When he is offered a job as a substitute music teacher, he seems to have found his vocation...

Jay's daughter Claire (Julie Bowen) and her husband Phil (Ty Burnell) are also facing big changes: her daughter Haley (Sarah Hyland) goes to college and takes a big step towards adulthood. For Phil there are too many changes: when his son Luke (Nolan Gould) tells him that he doesn't feel like trying to be a hobby magician anymore, Phil does everything to change his mind. And now of all times daughter Alex (Ariel Winter) is looking for her own identity and even tries her hand at being a goth. This "Modern Family" doesn't get any quieter yet...

"Modern Family" is one of the most successful comedy series in the USA. This popularity could not be achieved in Germany. But just on DVD, the lovably chaotic extended family has meanwhile also gained a loyal fan base. The very funny fourth season once again makes it very clear why this is so. Because while there may be some dramaturgical changes, everything remains the same in terms of style and humour. And that's a good thing, because it's the proven concept and the experienced interplay of the actors that make season 4 so amusing again. Especially the excellent comedic timing is extremely positive in some episodes. The discrepancy between what one of the characters says and what the viewer then gets to see makes for a lot of hearty laughs.

But also classic comedy elements like Phil's desperate attempts to offer his father-in-law a great 65th birthday - which of course goes wrong - or Gloria's not so ladylike behaviour during pregnancy make for a lot of good humour. Moreover, the stories told in this season are full of wit again, but always have an emotional side to them. When Claire and Phil bring their daughter to college and behave extremely embarrassingly, it's just funny on the surface. But when saying goodbye to the eldest daughter from her parents' house, there are also small emotional moments, but as usual they are pleasantly subtle.

The mixture of "Mockumentary" in the style of series such as "The Office" or "Parks & Recreation" and more classical family comedy makes this ensemble comedy particularly appealing. Well-observed everyday situations, deliberately exaggerated clichés and a good portion of slapstick make a visit to the "Modern Family" a great pleasure even in its fourth year. Therefore applies to all fans and those who want to become fans: Absolutely worth seeing!!

Picture + sound: Technically, the series on DVD leaves a good overall impression. The image is very clean, the overall sharpness is good and the coloration looks pleasantly natural. The fact that slight blurring is noticeable in the display of smaller details is hardly of any negative significance. The sound available in Dolby Digital 5.1 makes the amusing dialogues sound powerful from the speakers, but has otherwise hardly any noteworthy surround moments to offer. All in all, the English language version appears to be somewhat more harmoniously mixed than the German soundtrack, in which the dialogues seem to be somewhat more centrally mixed. Altogether there is a deserved one for the technical conversion measured at the genre: Good!

Extras: On the first disc there are some cancelled and extended scenes (approx. 3:38 min.). Disc 2 has another missing scene (about 0:36 min.), as well as two audio commentaries and the featurette "Family Growth" (about 6:15 min.), in which Sofia Vergara talks about Gloria's baby and what it was like to play a pregnant Gloria who still wanted to be sexy at all costs.

The other extras are on the third disc. Beside further cancelled & extended scenes (approx. 2:07 min.) and two further audio comments there are still the featurettes "Ein Tag mit Eric" (approx. 11:29 min.).), in which actor Eric Stonestreet takes the audience behind the scenes, "Ein moderner Erziehungsratgeber" (ca. 9:30 min.), as well as "Modern Family Writers" (ca. 12:44 min.) about the work of the screenwriters. A few amusing outtakes (approx. 9:59 min.) round off the bonus material. Strictly speaking, the season finale on the DVD in a slightly extended Director's Cut is also included.

Result: In the fourth year of "Modern Family" the signs are for change. New offspring are waiting in the house, a child leaves the safe nest, there are new professional challenges and many new problems. But one thing has remained the same: the high fun factor of the series, which still works really well just because of the wonderful interplay of the ensemble and good comedic timing. The DVD box presents the new episodes in good picture and sound quality, and the extras are also very impressive again. Altogether there are enough reasons for fans to buy this fourth relay box. Recommended