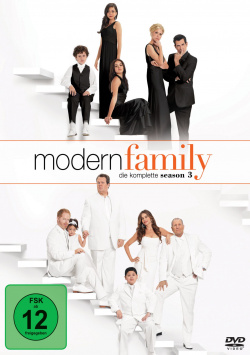 Content: In the beginning "Modern Family" may have been born in the wake of the success of other so-called "Mocumentary" comedies like "The Office", the role model for "Stromberg", or the critic's favourite "Parks & Recreation". But by the third year at the latest, this family comedy has clearly set itself apart from other series in the style of set documentaries and now stands on its own legs, extremely successful in the USA. The daily turbulences from three parts of a family are told. The head of the family is the grumpy head Jay (Ed O`Neill) with his hot-blooded Colombian wife Gloria (Sofia Vergara) and her son Manny (Rico Rodriguez). Jay's gay son Mitchell (Jesse Tyler Ferguson) and his partner Cameron (Eric Stonestreet) live in the immediate vicinity, as do Jay's daughter Claire (Julie Bowen) with her husband Phil (Ty Burnell) and their children Haley (Sarah Hyland), Luke (Nolan Gould) and Alex (Ariel Winter). A big family that lives so close together - that can only lead to conflicts and turbulent chaos again and again.

And that starts in the third season during a family holiday on an adventure ranch. Here Phil finally wants to prove to his father-in-law Jay that he's a real guy. And Haley's boyfriend, Dylan, has a big question that creates a lot of hustle and bustle. But even after this weekend trip is over, no peace returns to the life of the extended family. Because Mitchell and Cameron have decided that they want to adopt another boy, which doesn't seem to go down well with their Lily. Clair's got a whole different set of problems. She wants to protect her kids from razors in their neighborhood. But with the acting city council, she falls on deaf ears with her petition for a new stop sign. She then makes a decision: she wants to run for office herself. Phil attends his old college together with Haley and reminisces about the good old days - which is rather embarrassing for his daughter. A family outing to Disneyland, a sporty Thanksgiving and a very special Christmas are also on the program of the "Modern Family" this year...

The series also manages very well in the third season to tell actually very conventional, sometimes even a little clichéd stories fresh and enriched with lots of everyday comedy. This is achieved not only through the family interviews that are repeatedly interspersed and the direct interaction of the protagonists with the camera of the documentary film team, which is invisible to the viewer. It is also the very special constellation of figures who actually have nothing in common, but who are extremely closely connected to each other through their family ties. And that inevitably leads to wonderful situation comedy, which hasn't worn off for a long time in the third year either.

"Modern Family" has not yet been able to repeat the great success the series is celebrating in the USA in Germany. Nevertheless, a small, but fine fan community has also established itself in this country in the meantime, that recognizes that the makers have succeeded in doing something very special, that stands out pleasantly from conventional family sitcoms. The series makes use of the means of the classical family comedy. But these are interspersed with a lot of self-irony, so that a perfect suburban satire emerges, which behind the very obvious laughs still has much more bite to offer than it might seem at first.

Who is only used to the usual sitcom food, will perhaps have a hard time with the more special style of "Modern Family" at first. But only the really great cast and many wonderfully funny moments make it more than worthwhile to get involved with this series. And for those who already liked the first two seasons, these new, very funny episodes are simply not to be missed! Absolutely recommendable!

Picture + sound: Technically the series leaves a good overall impression on DVD. The image is very clean, the overall sharpness is good and the coloration looks pleasantly natural. The fact that slight blurring is noticeable in the display of smaller details is hardly of any negative significance. The sound available in Dolby Digital 5.1 makes the amusing dialogues sound powerful from the speakers, but has otherwise hardly any noteworthy surround moments to offer. All in all, the English language version appears to be somewhat more harmoniously mixed than the German soundtrack, in which the dialogues seem to be somewhat more centrally mixed. Altogether there is a deserved one for the technical conversion measured by the genre: Good!

Extras: The bonus material of the third season has been distributed over all three discs. It starts on DVD 1 with about 5 minutes of missing and extended scenes. In addition, there are three featurettes that look behind the scenes. It's about the family trip to Wyoming (about 9:21 min.) and the effort that was made to get the whole crew to the set there. Actor Ty Burell then leads the audience to the set of the episode, directed by his acting colleague and "Breaking Bad" star Bryan Cranston (ca. 5:25 min.). And finally it is shown how the children spent their time during the shooting in Wyoming (ca. 3:27 min.).

DVD 2 has more cancelled and alternative scenes to offer (ca. 9:19 min.). There is also a look behind the scenes of the Christmas episode (approx. 5:46 min.) and the episode in which Luke and Manny experience some adventures where the boys actually don't belong yet: behind the wheel of a car! In the longest extra of this box it will be shown how Ed O`Neill gets his star on the Hollywood Walk of Fame (approx. 16:06 min.), accompanied by hymns of praise from his TV wives Sofia Vergara and Katey "Peggy Bundy" Segal.

Finally, the last disc has a few cancelled and alternative scenes (approx. 7:15 min.) as well as amusing outtakes (approx. 8:34 min.) to offer and also looks behind the scenes of the family trip to Disneyland Resort (approx. 3:05 min.). Good!

Result: "Modern Family" continued its triumphal march in the USA with the third season of award ceremonies and proved to be a real hit again in the third year. In Germany, the comedy series is still rather an insider tip, but has also built up a loyal fan base in this country, which can now look forward to 24 new episodes. These are presented in the 3-disc box in good picture and sound quality. There are also a few nice extras that make the third season even more enjoyable. And of course there is an absolutely deserved one for that: Recommendable!