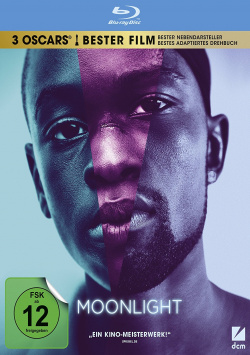 Film: Even as a 10-year-old boy Chiron (Alex Hibbert) notices how difficult it is to find his place in life. Not only because of his skin color, but also because of his social position he is suppressed by the other children. Only when he meets the dealer Juan (Mahershala Ali) and his girlfriend Tessa (Janelle Monáe) does his life seem to turn for the better. But even as a teenager it doesn't really get any easier for Chiron (Ashton Sanders). Again and again his drug-addicted mother (Naomie Harris) appears and thus shadows his otherwise good life with Juan and Tessa. In addition, he feels strongly attracted to his classmate Kevin - feelings that only confuse him even more. As a young man he finally calls himself "Black" (Trevante Rhodes), has a hard time behind him and completely isolates himself from his fellow men - until he receives an unexpected call…

There was hardly a film that was more present in the media at the beginning of the year than the Oscar winner "Moonlight" - with the exception of the audience favourite "La La Land" perhaps, who was wrongly announced as the winner of the BEST FILM before the mistake could be cleared up. The makers of "La La Land" proved to be very fair losers, while the team around the indie drama "Moonlight" was completely overwhelmed by the victory. The attention that both films received in the days after the award ceremony is perhaps not necessarily the advertising that the makers wished for, but at least it ensures that almost everyone has heard of "Moonlight", which would certainly not have been the case otherwise, but which this drama undoubtedly deserves.

Whether the best movie actually won or not is a matter of opinion. The fact that "Moonlight" doesn't release its audience in a happy and animated way could lead to some of them not finding access to the drama and therefore not being able to comprehend the praises and awards. The story Barry Jenkins tells here is full of depressing moments, sadness and a feeling of loneliness. And yet it also hides a certain beauty and a glimmer of hope that make the film so special and important. It is precisely this significance that justifies the Oscar and all other prizes in every respect.

Chiron's story is told in three formative sections of his young life. Jenkins often lets quiet moments speak, which present themselves as a perfect composition of pictures and music. Without striking moments, without kitsch as well as a reserved and therefore intense authenticity, an emotional power is built up, which culminates in a final scene, which manages to become one of the most moving and impressive final shots of recent cinema history with just a few words.

A great cast and intense pictures make this film get under your skin. Sure, "Moonlight" isn't an easy movie. It is an artistically demanding, dramaturgically perhaps somewhat unwieldy work, but with its modest means it shows so much truth about the necessity of human closeness, affection and finding the right place in life. In its sad and difficult way a beautiful movie, which deserves an "Absolutely worth seeing".

Picture + sound: "Moonlight" lives not only from its moving story, but also from its audiovisual realization. And it also comes into its own in home cinema. The image of the Blu-ray is absolutely clean and has a very atmospheric color scheme. The image sharpness is at a very high level and the contrasts are well mixed. The sound is rather reserved, but nevertheless very atmospheric, whereby music, dialogues and ambient noises are very well coordinated with each other.

Extras: The Blu-ray presents some very interesting extras, starting with an audio commentary by director Barry Jenkins, which was praiseworthy provided with German subtitles. There are also short documentaries about the shooting in Miami (approx. 5:38 min.), the cast (approx. 21:36 min.), the film music (approx. 10:05 min.) and the role of the music (approx. 2:05 min.). Impressions of the premiere in Berlin (approx. 1:52 min.), a discussion with the director after the premiere (approx. 12:30 min.), as well as an interview with Barry Jenkins (approx. 12:04 min.) complete the additional offer.

Fazit: "Moonlight" is a very artistic, moving and in spite of a certain slowness extremely stirring film. The Oscar winner presents himself on the Blu-ray in very good picture and sound quality and also has some good extras on board. That's what it's all about: Absolutely recommended!