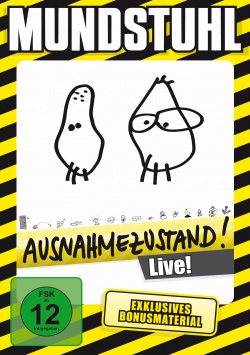 Film: Children, how time passes. It has been almost two decades since Mundstuhl with the characters Dragan and Alder stormed the German comedy scene. Since then, Lars Niedereichholz and Andre Werner have presented eight live programs, which they have repeatedly performed in front of sold-out houses all over the country. They are also welcome guests at various TV events such as "TV Total Turmspringen", have invented one of the most successful ringtones ever (Die zwei Tassen), have sold over 1 million CDs, singles (including the iconic Christmas Medley) and live DVDs, published a successful book, won an echo and and and and...

"State of emergency" is the name of the current programme of the two Hessians, with which they have been successfully touring the country since 2012. In April 2014 the whole thing was recorded live in the Hofgarten Kabarett Aschaffenburg and now released as DVD and double CD. The program of course includes a reunion with Dragan and Alder, who talk about Alder's latest favorite drink, "Aperol Scheperitz", but also with other popular characters like Peggy & Sandy, who talk about Peggy's new boyfriend who wants to have sex with her even though she has "the painters in the basement", or with the ingenious product inventors Bob & Bob, who have invented a great product against unemployment. In addition there are grill tips with the Grillschorsch, the long-awaited comeback of Siegfried and Roy or also an appearance of Andie, who got to know his new old on assi-partner.de. Musical interludes ("El Lute", "Sand im Po") and some video inserts (mouth chair in the woods, C- and F-croissants) are also a must.

"State of emergency" offers fans exactly what they love about mouth chairs. So the first argument between Lars and Andre starts at the entrance number and they talk each other into their usual amusing rage. Then the viewer learns how to heat with penguins, why Actimel is dirt and why giraffes are assholes. And also a small side blow - which can also be understood as a respectful bow - in the direction of the colleagues of Badesalz cannot stifle mouth chairs. These and all the following jokes in the 90 minutes are not necessarily what the feuilleton praises or what is generally known as subtle humour. Mundstuhl has always been a bit coarser and many gags are close to the waistline, sometimes even below it.

However, that's exactly what the fans of the duo love about them. Otherwise they would not have had such a respectable success far beyond the borders of Hesse for almost two decades. The fact that they only marginally varied their style during this time and did not noticeably develop is not really bad. Because they give their fans exactly what they want to see and what they can laugh about even after eight live programs. And that's why there's a very clear one again for this DVD: Worth seeing!

Picture + sound: For a live DVD, the picture and sound quality of the program can be completely convincing. The picture of the DVD is very clean and has a good overall sharpness and a harmonious coloring. The Dolby Digital 5.1 mix is rather unspectacular overall, but makes the voices and music sound clear and powerful from the speakers. For a live recording of a comedy program this is completely satisfactory. Good!

strong>Fazit: "Ausnahmezustand" offers exactly what fans can expect from a mouthchair program. There is a reunion with popular characters like Dragan & Alder, Peggy & Sandy or the Grillschorsch. There's the usual cabbage between the two comedians, lots of hefty jokes, a few amusing clips and also some music. Fans of the duo will get their money's worth with this program once again. The DVD presents the recording from Aschaffenburg in adequate picture and sound quality. The bonus material is rather meager, but fans can still risk a glimpse here. Altogether there is a deserved one for it: Krass empfehlenswert!