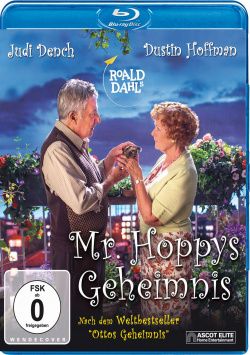 Film: The Shy American Mr. Hoppy (Dustin Hoffman) has a secret passion for a long time: he loves his fun-loving neighbour Mrs. Silver (Judi Dench). Since her first encounter he would like to marry her immediately. But to confess his feelings to his beloved is out of the question for the quiet plant lover. Instead, he adores her from his balcony. When he learns that Mrs. Silver is very sad that her beloved turtle Alfie just doesn't want to grow, Mr. Hoppy makes a bold plan to finally win his neighbor's heart. All he needs is a big fishing rod, a magic poem from Africa and over 100 turtles...

"Mr. Hoppy's Secret" is based on Roald Dahl's bestseller "Otto's Secret". The TV adaptation of the book commissioned by the BBC is a small, extremely charming film that lives from a lovingly playful production and the two wonderful leading actors. Of course everything here is overdrawn and a bit weird - from the colors to the characters to their actions. The way in which James Corden leads the viewer through the film as a narrator alone is rather unusual and therefore might not appeal to all viewers. But if you get involved with it, you'll realize that the narrator part fits perfectly to the sound of the rest of the movie and at the latest at the end integrates itself perfectly into the very nice story.

It might not sound very positive when you say that everything is a bit simpler here. The story is quite simply knitted in its own way, the humor is harmless throughout and also aspects like the camera or the equipment seem a bit unspectacular at first glance. But those who immerse themselves in history will quickly realize that the power lies in simplicity. It's the many little things that make the look of the film and the story so magical and worth seeing. Dustin Hoffman, for instance, becomes so incredibly loveable because of his extremely reduced facial expressions, that you actually want to hold him in your arms all the time.

Spiced with a tasty pinch of typical British humor and a sugar-sweet finale, "Mr. Hoppy's Secret" is the best home cinema entertainment, which is primarily aimed at the 50+ generation, but which also younger viewers can really enjoy. Not least thanks to the screenplay by Richard Curtis ("Actually...Love") and Britcom specialist Paul Mayhew-Archer, director Dearbhla Walsh has succeeded in creating a small but fine romance, which radiates a lot of joy and love and therefore can easily exist alongside big cinema productions. Absolutely worth seeing!

Picture + sound: The film has its very own, intentionally artificial-looking colour scheme, whose fairytale-like character is shown to advantage on Blu-ray. Otherwise, the picture pleases with a pleasant sharpness of detail and well balanced contrasts. The overall sound is very restrained, which is completely in keeping with the movie, but at times it can also unfold a little bit of dynamism. Good!

Fazit: "Mr. Hoppy's Secret" is an enchanting romance that lives on two great leading actors and a playful production. The small TV production is bursting with original ideas and charming British humour. Dustin Hoffman hasn't been as lovable as he is here for a long time. A wonderful film that not only the 50+ generation can enjoy. It doesn't matter that the technically well implemented Blu-ray doesn't have any bonus material to offer. For the movie alone there is already a very clear one: Absolutely recommendable!