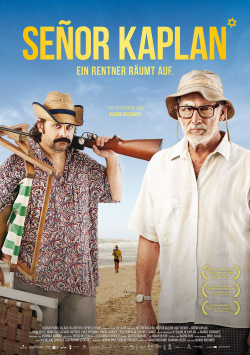 Jacob Kaplan (Héctor Noguera) is frustrated: he is 76 years old and leads a quiet life in Montevideo. That's no reason to be unhappy. But Jacob is annoyed by the fact that he has not performed a single heroic deed in his 76 years. The world hasn't been made any better by him. And with this feeling he simply can't and won't deny his old age. But then he hears about his niece the rumour that a German Nazi has been living a carefree life on the coast of Uruguay for years. Now Jacob sees his chance: he wants to expose the man heroically and bring him to his just punishment. But he can't do it all by himself and so he lets the ex-policeman Wilson (Néstor Guzzini) help him with his Nazi hunt. In fact, they get on the trail of the German (Rolf Becker). But their plan to kidnap him and hand him over to the Israeli authorities is proving to be much more complicated than previously thought...

With "Señor Kaplan" director Alvaro Brechner tries to deal with serious topics with reserved, enigmatic humour. He almost completely avoids all too obvious laughs. Rather, he relies on quiet punch lines that make the viewer smile in amusement. Immersed in wonderful pictures and warm colours a certain lightness is achieved, which was not to be expected in view of the motives of the story. It's about old people who are pushed onto the sidetrack by society and desperately looking for a sense of their existence. It is about the desperate attempt of an ex-policeman to get back on his feet after a deep fall and thus save his broken family. And finally, it's also about atoning for Nazi crimes.

Brechner deserves credit for having managed to integrate all these themes into the action with a humorous ease, without ever allowing his film to degenerate into a flat comedy. He finds a very good balance between humor and drama, which is also very well conveyed by the actors. However, it must also be said that especially in the middle part there are some very tough moments that take the necessary momentum away from the whole. A little more speed and esprit would have certainly done the production good in the end.

However, "Señor Kaplan" doesn't want to appeal to a mainstream audience either. The film is clearly tailored for lovers of more subtle arthouse fare. And they won't be bothered by some more bulky moments. Nevertheless: with a little more wicked wit and a little less length the attempt of a pensioner to do something heroic on his old days would surely have become a big cult cinema. So the whole thing is "just" very nice entertainment for a niche audience. Since this is really well used, there is a very clear bottom line: Worth seeing!