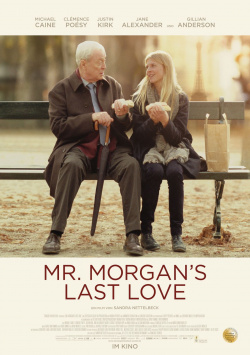 Since the death of his wife, Matthew Morgan (Michael Caine) has lost all lust for life. He laboriously drags himself through the everyday life of grief and loneliness that the former professor at Princeton University now has to spend in Paris, which is completely foreign to him. He came to France out of love for his wife and always relied on her for language and culture. Now Mr. Morgan is on his own in a country whose language he doesn't understand. And to change that now, he lacks the strength and the will to do so. But a chance encounter with dance teacher Pauline (Clémence Poésy) brings the stubborn hermit back to life. The infectious optimism and joie de vivre of the young woman bring Mr. Morgan a little light back into his mind, which is clouded by darkness. During long walks, joint meals or excursions, Pauline manages to open the old man's heart to such an extent that he is even prepared to approach his completely alienated son Miles (Justin Kirk) again. However, this proves to be extremely complicated, especially as Miles is extremely sceptical about the friendship between his old father and the young woman. When he and his sister Karen (Gillian Anderson) unsuccessfully try to bring Mr. Morgan back to the USA to take care of him there, Miles' life suddenly takes an unexpected turn with

With "Mr. Morgan. Morgan`s Last Love" the German director Sandra Nettelbeck ("Bella Martha") delivers a sensitive and heartwarming adaptation of the French novel "The Last Love of Monsieur Armand". The fact that the French main character has been turned into an American proves to be a very good decision, just because of the wonderful main character Michael Caine. With his play, Caine already provides several goose bumps in the first minutes, which are intensified by Nettelbeck's sensitive staging. For example, there is a wonderful moment when Matthew is overwhelmed by the memories of his wife during a walk through the streets of Paris, which could bring little tears to the eyes of sensitive viewers.

Just in the first hour "Mr. Morgan`s Last Love" is a simply beautiful movie. At the beginning, the whole thing almost seems like a more mass-appropriate version of Michael Hankee's "Love", but soon it becomes a very tender, life-affirming story about friendship, community and family. Carried by convincing, charming actors and immersed in enchanting images of Paris, the novel is well on its way to becoming an almost perfect emotional cinema. But in the end that doesn't work. Particularly with regard to the father-son conflict, the staging in the last third increasingly loses itself in too tenacious dialogues or dramaturgically superfluous moments that unnecessarily drag the film out. This is annoying because the end can be foreseen much earlier and the path to it is on unnecessarily complicated paths.

That leaves a small flaw on the otherwise so positive overall picture of the drama. Although the end doesn't quite reach the emotional strength that the beginning suggests, it's enough to give you goose pimples. Sandra Nettelbeck knows very well how to mix real feelings with a little bit of loosening up humor, which in the end results in a very positive, thrilling look at the beauty of life, which despite the many sad moments releases the viewer from the cinema with a real feeling of happiness. "Mr. Morgan's Last Love" may not be the big shot he could have been. But the film is a beautiful, well played and moving piece of goose bump cinema. If you're not ashamed of your tears in the cinema and like it a bit more sensitive, close to the border of kitsch, you shouldn't miss this work. Worth seeing