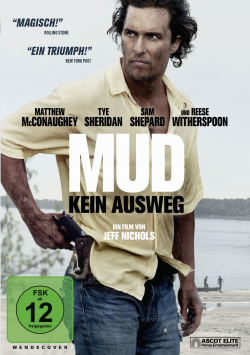 Content: The two friends Ellis (Tye Sheridan) and Neckbone (Jacob Lofland) take every opportunity to escape their dreary everyday lives. When they hear that a storm on a small island in the Mississippi has hurled an old boat into the treetops, it sounds like a big adventure for the boys. In fact, they find the boat, but find that someone has already made themselves at home here: Mud (Matthew McConaughey), who is wanted for murder, hides here from the police and the bounty hunters, who are supposed to blow the light out of his life. When Mud tells the boys that he committed the murder to protect his great love Juniper (Reese Witherspoon), Ellis and Nackbone decide to help the stranger. Together they want to make the boat ready to sail again and make sure that Mud can flee to a safe place with Juniper. But the boys have no idea how dangerous this pact could become for them and their families...

"Mud - Kein Ausweg" is a successful mixture of southern drama, thriller and coming-of-age story. As with his predecessor "Take Shelter" director Jeff Nichols once again shows an extremely good knack for an atmospheric and extremely engaging visual language. This is embedded in a very quiet, yet thrilling narrative flow that takes time to build up the individual storylines and develop the characters. Only towards the end the pacing increases and there is also something like real action. But all in all "Mud" is a very quiet movie, that can convince on all levels.

The focus is on the story of Ellis, who believes in love and therefore takes all the risks to help Mud. The man's story also helps him approach himself to his first great love. The culmination in a scene that is absolutely heartbreaking in its closeness to reality. For Ellis, but also for Neckbone, the events mark the end of her childlike innocence. In this aspect, memories of "stand by me" emerge. And even the comparison with "Huckelberry Finn" drawn by the New York Post can't be dismissed.

Alongside, the film also tells the moving story of a crime of love, whereby the question is always how much truth there is in what Mud tells the boys. Matthew McConaughey, who proved himself to be a real chameleon last year with his role in "Dallas Buyers Club" and his short but striking appearance in "The Wolf of Wall Street", once again delivers an extremely haunting and convincing performance. His young co-stars impress with great naturalness, which also allows them to hold their own against experienced supporting actors such as Oscar-winning Reese Witherspoon, Michael Shannon or Sam Shepard.

"Mud - Kein Ausweg" is a film that is extremely moving in its tranquillity, whose emotional level is extremely authentic, as it dispenses with any form of kitsch or overstrained clichés. It's a moving story about friendship, about love and about growing up, told in a really nice movie. It may be that his speed is nothing for the broad mass taste. But if you appreciate sophisticated American cinema and already liked "Take Shelter", you shouldn't miss the new movie by Jeff Nichols. Once again, a home cinema premiere that would actually have been heard on the big screen. Absolutely worth seeing!

Picture + sound: The captivating visual language of the film is very well shown on the DVD thanks to the good conversion of the earthy tones, the high sharpness of detail and the harmonious contrasts. The sound is very restrained over long distances and is primarily determined by the dialogues, soft ambient noises and the music. From time to time, the surround channels become more noticeable. Altogether a very harmonious and atmospheric conversion of picture and sound. Good!

Extras: In addition to TV commercials and the trailer, the DVD also has an interview with Matthew McConaughey and Reese Witherspoon (approx. 5:34 min.), as well as a proper Making of (approx. 16:06 min.) on offer. The Blu-ray also has exclusive interviews and B-Roll recordings to offer.

Fazit: "Mud - Kein Ausweg" is a gripping drama and a very stirring coming-of-age story, which director Jeff Nichols has realized with great actors and an engaging visual language. The rather carried narrative flow does not necessarily correspond to the viewing habits of the broad masses. But if you can get involved, you will be rewarded with a real pearl that deserves to be seen on the big screen. For lovers of the demanding American cinema this Southern drama is an absolute must!