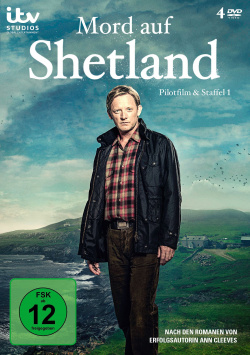 Content: Detective Inspector Jimmy Perez (Douglas Henshall) was no longer in his home country for a long time. But after the death of his wife he returns to the Shetlands with his stepdaughter Cassie (Erin Armstrong). Here he would like to find the peace for a new beginning. But soon it becomes clear that the rough idyll on the North Atlantic archipelago is a very deceptive one. Because he doesn't just have to deal with the prejudices of a sworn island community, he also has to solve brutal and complicated murder cases. With the help of his new colleagues Alison "Tosh" McIntosh (Alison O`Donnell) and Sandy Wilson (Steve Robertson) Perez at least manages to get used to the peculiarities of the islanders faster. But the past, which he had hoped to escape from here, can't be shaken off so easily…

Based on the "Shetland" thrillers by Ann Cleeves, who already wrote the original for the crime series "Vera - Ein spezieller Fall", "Mord auf Shetland" offers first-class crime entertainment in front of a fascinating backdrop. The landscape of the Scottish Shetland Islands is rough and the viewer always has the feeling that the cold wind is blowing through the living room. Here a very special atmosphere unfolds visually, in which the crime story can unfold perfectly.

The stories are grippingly constructed, even if the wheel is not reinvented here. However, the makers succeed very well in luring not only the investigators, but also the audience onto the wrong track, which keeps the suspense on a high level. This is important inasmuch as the slow pace of the production almost sets a counterpoint. Those who expect action are absolutely wrong here. A calm narrative flow prevails here, which, however, never even comes close to something that could be called boredom.

Alongside the fascinating landscapes and gripping stories, it is also the actors' play that makes "Murder on Shetland" first-class crime thriller entertainment. Especially leading actor Douglas Henshall, known from the fantasy series "Primeval - Return of the Primeval Monsters", delivers a great performance. The different facets of his figure make DI Perez a really interesting character with corners and edges. But also Henshall's co-stars and the good guest stars make the series absolutely successful in acting.

Who appreciates noble crime food from Great Britain and places more value on atmosphere than on tempo and action should definitely buy this first DVD set. Absolutely worth seeing!

Picture + sound: The series thrives on the atmosphere created by the rough landscape. This is captured in atmospheric pictures, which are shown to advantage on the DVD thanks to a successful colour scheme and a good overall sharpness. The sound is rather reserved, whereby the powerfully mixed dialogues are again and again supported by well used ambient noises. Good.

Extras: Unfortunately the DVD set does not have any bonus material to offer.

Fazit: "Murder on Shetland" is an exciting crime series that lives mainly from its atmospheric staging. Despite the very restrained pace, the stories of the first season are absolutely thrilling and thrilling. The DVD presents the four episodes in feature length in good picture and sound quality. Interested viewers only have to do without bonus material. The bottom line for all fans of British crime food is clear: Absolutely recommendable!