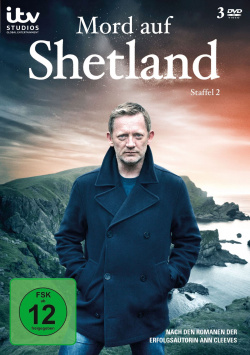 Content: Leanne Randall desperately reports to Shetland Police. She had met a young man named Robbie Morton on the ferry. They had arranged another meeting, but Robbie had disappeared without a trace. Leanne is sure that something has happened to him and that a mysterious stranger (Ciarán Hinds), with whom Robbie had quarreled on the ferry, has something to do with it. But the police don't believe her. Only when a little boy lands in intensive care after finding strange pills on the beach does Detective Inspector Jimmy Perez's (Douglas Henshall) alarm bells ring. He is convinced that the drug discovery and the disappearance of Robbie have something to do with each other. When the young man is found murdered, all traces seem to lead to the mysterious stranger. But it soon becomes apparent that this case is even bigger than expected. When Perez and his team in Glasgow investigate the wirepullers, the story takes an unexpected and life-threatening turn…

Season 2 of the series "Murder on Shetland". tells a long story in three episodes the length of a feature film, which is really not a second boring just because of the numerous twists and turns, but also because of the brief change of plot from the Scottish Shetland Islands to Glasgow. The makers of the series, based on Ann Cleeves' "Shetland" detective stories, have managed to weave various plot strands into an atmospherically dense thriller that can maintain its tension for five and a half hours with numerous twists and turns. As atmospheric as the rough landscape of the Shetland Islands is, a bit of variety in the series is good - especially when, as here in a season, only a big case is dealt with. Another positive aspect is the top-class guest star Ciarán Hinds ("Game of Thrones", "Harry Potter", "Rome"), who raises the already high acting level of the series once again.

The second season of "Murder on Shetland" - in Great Britain as the 3rd season of the "Mord auf Shetland". Despite the once again very quiet narrative style, it offers absolutely captivating thriller entertainment, which is also lifted to a very personal level for Perez and his team in the last part. If you like it a bit darker, you will get your money's worth. Absolutely worth seeing!

image + sound: The series thrives on the atmosphere created by the rough landscape. This is captured in atmospheric pictures, which are shown to advantage on the DVD thanks to a successful colour scheme and a good overall sharpness. The sound is rather reserved, whereby the powerfully mixed dialogues are again and again supported by well used ambient noises. Good!

Extras: Unfortunately, the DVD set does not have any bonus material to offer.

Fazit: "Murder on Shetland" in this season tells an overarching story about a single case, which gradually takes on immense proportions and becomes a real challenge for the investigators on a personal level. A completely successful season, which is available on the DVD in good picture and sound quality. The only drawback is that there is no bonus material. Nevertheless, the following is clearly true: Absolutely recommendable!